Not A BRHG Event
The Haymarket, Chicago and Mayday On the evening of Tuesday May 4th 1886 near the Haymarket, Chicago, armed police attempted to violently disperse a few hundred members of a peaceful demonstration called to protest about the police killing of striking workers. As the police moved against the crowd a bomb was thrown by an unknown person wounding several of their number. In the ensuing chaos the police opened fire slaughtering demonstrators and police alike. In the days following the incident […]
Read More »

Captain Jack White DSO attracted adjectives like jam does wasps - flamboyant, gallant, romantic, handsome, idiosyncratic, incorrigible - and every one of them was appropriate. He was a Presbyterian from the northern part of Ireland who fought in the Boer War, became the first commander of the Irish Citizen Army in the 1913 Dublin Lockout, was arrested for sedition during WW1, fell foul of all the police/paramilitary/governmental authorities in Ireland between 1913 and 1936, and participated in […]
Read More »

This talk will focus on an on-going research project into the anarchist elements of the wider Spanish community in Dowlais and Abercraf, c.1900-1920. Following a shortage of labour during the Second Boer War (1899-1902) the management of the Dowlais Iron Works used its subsidiary company in the Basque region to encourage Spanish labourers and their families to move to South Wales. By 1911 there were 264 Spaniards in the borough of Merthyr Tydfil, part of an international community which also […]
Read More »

When both levees and governments failed in New Orleans after Hurricane Katrina in 2005, the anarchist-inspired Common Ground Collective was created to fill the void. With the motto of 'Solidarity Not Charity', they worked to create power from below; building autonomous projects, programs, and spaces of self-sufficiency like health clinics and neighborhood assemblies, while also supporting communities defending themselves from white militias and police brutality, illegal home demolitions and […]
Read More » 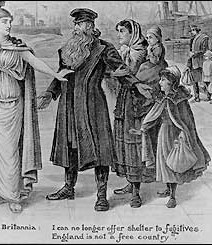 This book can be bought from breviarystuff.org.uk. In the 1970s and 80s a revival of interest emerged in researching Bristol’s vigorous radical past, reflected in the publications of the Bristol branch of the Historical Association and Bristol Broadsides. This revival has continued, echoed in the more recent historical studies that have advanced the work of filling in Bristol’s remarkable past — especially the involvement of the Bristol women’s movement in the nineteenth century in anti-slavery […]
Read More » 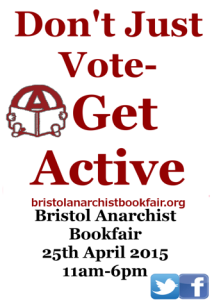 The 7th Bristol Anarchist Bookfair will be on Saturday 25th April 2015 at The Trinity Centre. If you want to get a stall at the 'early bird' discount rate you should do so by 14th February. As part of the bookfair Bristol Radical History Group will again be running the Radical History Zone hosted as usual by Hydrabooks, just down the road from Trinity. The programme for the RHZ is being finalised and will be published when all the speakers have been confirmed.
Read More »

G. K. Chesterton’s The Man Who Was Thursday not only draws upon the historic stigmatisation of anarchists but also self-consciously explores and develops the caricature. The novel was first published in 1908. During the late Nineteenth Century anarchism had emerged as a distinct militant strand of socialism, a distinction underlined by the exclusion of anarchists from the Second International. By 1908 the anarchist movement had been heavily vilified due to various individualist ‘outrages’. […]
Read More »
Read More »
This website uses cookies for comments, shopping and to gather stats for our geeky pleasure. Read More Accept Reject
Privacy Policy