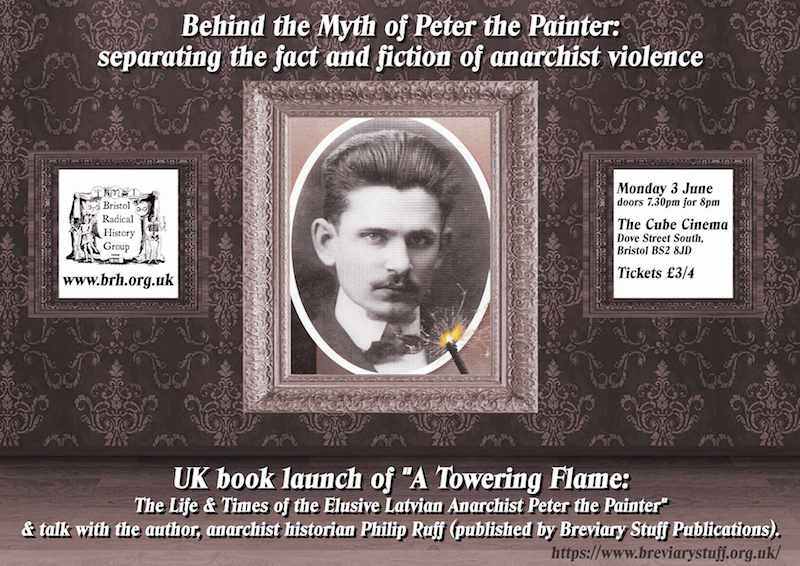 Bristol Radical History Group is excited to host the UK book launch of “A Towering Flame: The Life and Times of the Elusive Latvian Anarchist Peter the Painter” (published by Breviary Stuff Publications). The author, anarchist historian Philip Ruff, will present and talk about his book. There will then be a Q&A and discussion.

BRHG last hosted Philip Ruff when he gave a talk on ‘Political Assassins‘ during Off With Their Heads – Bristol Radical History Week 2008. At that point he had been researching the mystery of Peter the Painter for over 20 years. In 2012, a first version of this book was published in Latvian, in Latvia, by SIA Dienas Gramata. Then, in late 2018, a revised & updated version in English was published, again in Latvia, by the same publisher, as a limited promotional edition. We now look forwards to this first UK publication, revised and edited by Breviary Stuff Publications, being the culmination of over 30 years of diy research by the author around the world.

Please note:
– Copies of the book are available on the night, signed by the author, at a discount for attendees.

The Houndsditch murders of three City of London policemen on 16 December 1910, and the ensuing “Siege of Sidney Street” on 3 January 1911, in which Latvian anarchists took on Winston Churchill and the British Army, have entered into East London folklore. But no one ever accounted for the mysterious Peter the Painter, popularly supposed to be the leader of the gang and to have escaped the burning house during the battle.

This book solves the mystery. Here for the first time is proof of the real identity of Peter the Painter; the amazing story of his life and revolutionary career; and of the hitherto unknown history of Latvian anarchism. The violent events in London are revealed to be part of a much bigger story which lay behind them – the 1905 revolution in the Baltic and the armed resistance to Russian state terrorism which followed it. This is a story of class war, revolution and survival; and of a small nation striving to assert its identity; a story that, in the context of a resurgence of Russian imperial ambition aimed at the Baltic States, has particular resonance today.

You can book tickets for the event here. 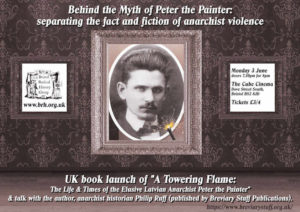