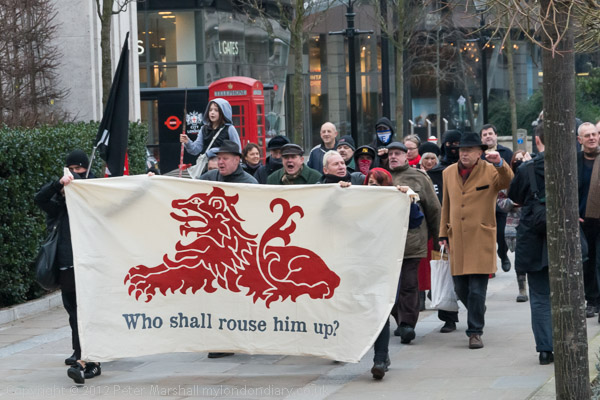 Some members of BRHG, ‘The James Nayler Brigade’ travelled to London on Sunday to support our comrade 5th Monarchists and Muggletonians. Armed with hatchets and a pike (which we had buried some years ago in readiness for the reimposition of the satanic monarchy) we helped storm the Guild Hall and St. Paul’s in celebration of the 5th Monarchist rising against the return of the King on 6th january 1661. 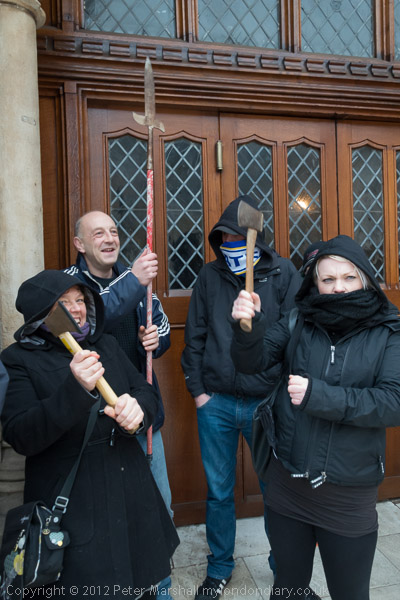 One of the leaders of the insurrection, Thomas Venner spurred on the Fifth Monarchists with these words:

‘And now to suffer all these things, and lose our Birth-rights, and to entail Persecution, Slavery, Popery, and Idolatry, to our Posterities for ever … is grievous; but to suffer them from the Cavaliers, an old, beaten Enemy, and that without striking a blow, or bleeding in the Field for that which is much better then our Lives is the Aggravation. For how did this old Enemy come in? did he beat us in the Field? did he win it with his sword? is our Cause lost? or is our God dead? no! how then? Why, by lies … by hellish plots and contrivement’ 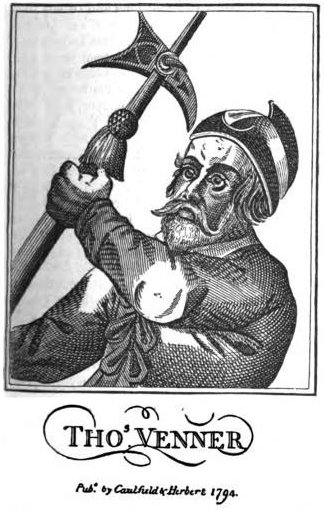 The 50 or so insurrectionists (men and women) showed incredible bravery (for four days of fighting against thousands of militia and the Kings Guard) and literally fought to the death , the few survivors (including Venner who was wounded 19 times) were hung drawn and quartered. 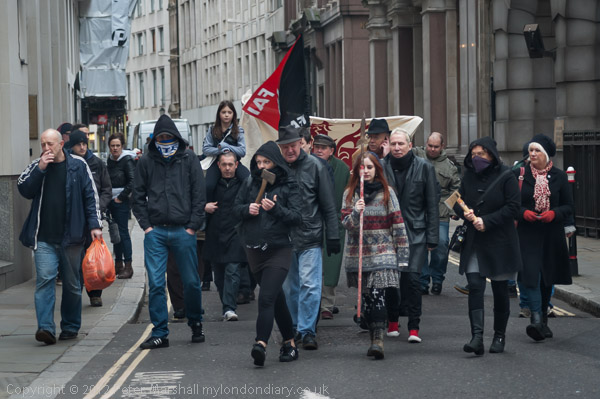 One amazing moment was to see the great granddaughter of the ‘last Muggletonian’ (see E.P. Thompson’s book Witness Against the Beast) wielding a pike outside St. Pauls. 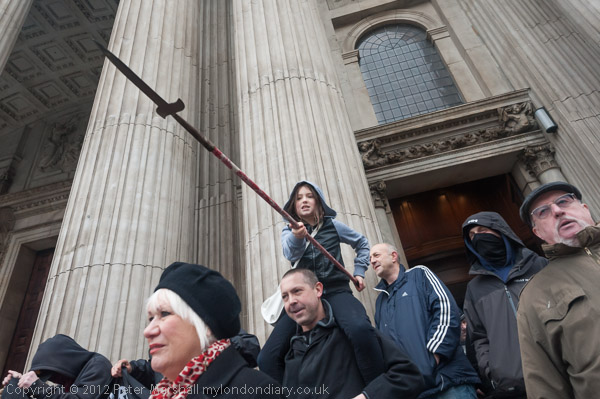 The event was also a chance to get some footage for a new docu-drama film on Venner and the insurrection.

More photos at My London Diary and here is their write up of the event…..

The bloody armed insurrection by Thomas Venner and fellow Fifth Monarchists standing up heroically against the re-imposition of the monarchy at Epiphany in 1661 was remembered today in a re-enactment walk following the route of his uprising.

The Fifth Monarchists were an important religious movement in England during the rule of Oliver Cromwell, seeing the execution of King Charles as being part of the fulfulment of the Biblical prophesy in the book of Daniel about the end of the four kingdoms of history being followed by the “rule of a son of man” for a thousand years (which they took as the rule by the Pope) after which would come the Christ’s reign on earth. For this to happen, the old order had to be ended by violence – as had begun with the beheading of the king.

They included three of those who had signed the execution warrant, but they soon become disillusioned with Cromwell, who they saw as trying to make himself a king and they began to agitate against him. Thomas Venner was imprisoned for several years for plotting to overthrow Cromwell, but released when Richard Cromwell became Protector.

They were incensed by the restoration of the monarchy, and in particular by the savagery shown by the new order against the ‘regicides’, including Fifth Monarchist Major-General Harrison who showed great bravery during his gruesome public execution by hanging, drawing and quartering.

Venner, a popular lay preacher and one of the most radical of the group, led a congregation at Swan Alley (now Great Swan Alley) in the north of the City of London, and at the start of 1661 he lead a group of around 50 men (and some women) from there to attack key points in the city of London with the battle cry “King Jesus and the heads upon the gates”. For four days they held various parts of the city and fought off attempts to stop them, but then were met by a large force from the army. They took refuge in a pub in Coleman St and continued to fight for several hours until all were either killed or captured. Venner, who had earlier killed three men with his halberd in Threadneedle St nad been wounded 19 times before he was overpowered.

After a brief trial at the Old Bailey, and along with ten others he was sentenced to be hung, drawn and quartered; the sentence was carried out in front of the meeting place of his congregation in Swan Yard on 19 Jan 1661. Although many other Fifth Monarchists who had taken no part in the rising were hunted down and hung or imprisoned, and draconian laws were enacted against dissenters this did not end the movement.

Around 25 people, including a number of figures well-known on the anarchist and radical left, met at the site of Venner’s death to remember these radicals who lived and died for their beliefs in a more egalitarian society. Among them with his young daughter was the grandson of Philip Sidney Noakes, the last of the Muggletonians who died in 1979. They were another egalitarian dissenting sect which began around 1651, but unlike the Fifth Monarchists, were pacifists.

Ian Bone, one of the organisers of the event, gave a detailed account of the events of 1661, and together with other speakers stressed the continuity between these seventeenth century figures and modern radicalism despite the religious frame of thought through which they saw the world and perforce expressed their views.

The group set off following the route that the rebels had taken in 1661 along Swan Alley and into Coleman St, and like them were led by a young woman holding a pike. A very fine banner with the text ‘Who Shall Rouse Him Up’ was behind her, and there were other banners including that of Bristol Class War, and ‘Rioters Reunited’, used at the 20th anniversary of the more recent Poll Tax riots, as well as an anti-workfare banner carried by a group in black with face masks, who also had red and black anarchist flags. On the route the marchers shouted some of the old slogans, ‘King Jesus’, ‘Heads On Pikes’ and ‘Nobility In Chains’. A few carried weapons – axes and a pike – as props for the filming, and there were frequent stops to allow the camera to get into position to film the next stage.

They looked impressive running behind the banner into Guildhall Yard, but contented themselves with standing in front of the doors, waving weapons and fists and shouting slogans – rather than storming the building 1661 style – before taking off for another rampage towards the camera down King St. They even folded up the banner to walk through New Change (now a shopping centre) rather than risk upsetting the shoppers, before finally rushing up the steps of St Pauls, where rather than breaking in like Venner they simply stood on the steps for photographs before deciding it was time to pack up and go to the pub.