What a rollicking read!

This book blasts you through the religious wars of 16th Century Northern Europe at a cracking pace. The authors (all four of them) are truly steeped in the knowledge of the period’s history – and it shows! The characters are real, living and, all too often, bloody participants in the protestant (in this case German Anabaptist) struggle to overthrow the Catholic Church’s Holy Empire. But more, it’s the story of people’s struggle to overthrow the dominant mindset imposed by the Catholic Church through its priests, bishops, cardinals and the knights and armies of landed princelings. Full of intrigue, rebellion, revolution, counter-revolution, double-cross, and double-dealing ‘Q’ shifts brilliantly from the thoughts, feelings and desires of the ‘highest’ in the land to those experienced by the lowliest landless peasant or whore.

Q shows dramatically how ideas have no national boundaries. How technology, in this case the printing press, became a tool for liberation. Just look how the internet, Facebook, mobile phones, etc. were closed down recently by various North African rulers and compare that to the efforts of the Catholic Church to prevent the spread across the continent of bibles translated into European languages and made available to the masses. How revolutionary it was to read or hear, for the first time, “An eye for an eye, a tooth for a tooth”, “Blessed are the poor…”, etc.

In 16th Century Europe politics and religion were nigh on inseparable and religious unity was regarded by the state and religious establishments across Europe as essential for political union. Thus those who followed the teachings of Martin Luther and other reformist protestants challenged not only established Catholic belief but also the authority of the Kings and Princes of Christendom. There’s a huge debate currently being led by mainstream historians who are saying that the religious wars in 16th Century Europe were just that; wars about religious beliefs. These historians challenge the counter-view that the initial Lutheran ideas of reform of the Catholic Church were then taken up by the ‘middle sort’ of people and by destitute peasants who craved a revolution and the establishment of a common wealth based on the original world of Adam & Eve where all was in common ownership. This book, allows us to see tsunami shock-waves of humanity sweeping away the old order and old ways of thinking and does so through the eyes of fact-fictionalised characters who will inspire all who read this book.

Q is so refreshing. Normally books about this period in European history deal with the Kings, Queens, Popes and Bishops – the ‘big’ names – this one rollercoasts across Europe following the lives and exploits of individuals who have few means, plenty of courage and are armed with a will to turn the world upon its head – in the face of overwhelming odds. These people changed the world. These people made us who we are today. Read this book! 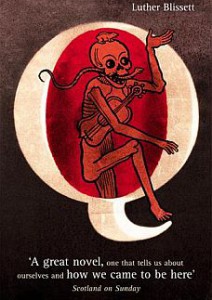