The James Nayler’s entry into Bristol and subsequent trial in October 1656 was reconstructed on Saturday October 28th October as part of the Bristol Radical History Week 2006. 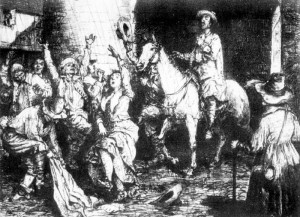 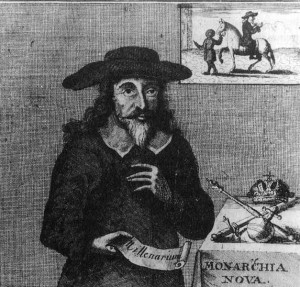 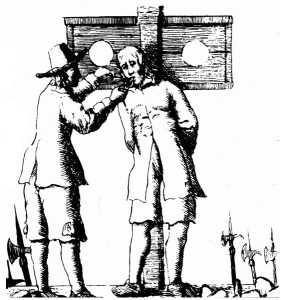 1656: On a rainy day James Nayler rode up Corn Street being hosannaed by ranting women. This act was intended to mimic Jesus’ entry into Jerusalem on Palm Sunday.
2006: On a rainy day James Nayler rides up Corn Street, he is hosannaed by ranting cancan dancers. The Blew Regiment of The Cittie of London Trayned Bandes from the Sealed Knot follow on behind.

1656: James Nayler and his supporters rode into Bristol that October day to enact a ‘sign’, a symbolic act which represented their belief that ordinary men and women could achieve the perfection of Christ and perform Christ’s works. This was a ‘levelling’ act in itself, bringing what was made untouchable by the whole structure of Christianity down to the everyday life of a common farmer.
2006: For this brave act alone he should be remembered.

The captions in this section include the script from the Commemoration.

1656: James Nayler was taken to London for a 10 day trial in Parliament.
2006: James Nayler is marched to St. Peter’s Square on Castle Green for trial.

Accuser: James Nayler you are charged with ‘Horrid Blasphemy’ for first admitting religious worship to be paid to you and second for assuming the names, titles and attributes of the blessed saviour Jesus That you have taken the names… ‘ the fairest among ten thousand’, the only begotten Son of God, the Prophet of the most High, the King of Israel, the everlasting Son of Righteousness and the Prince of Peace.

Nayler: Nay, I bow to no man

Judge: Are you James Nayler?

Nayler: The men of this world call me James Nayler

Judge: Why dost thou not live with your wife?

Nayler: I did, till I was called to the army.

Judge: You served with the New Model Army?

Nayler: With Fairfax and Lambert.

Judge: Art not thou the man that rode on horse back into Bristol with these women singing ‘Holy, Holy, Holy Hosannah’ Nayler: I did ride into a town, its name I know not and the spirit did command these women to cast down their clothes, to sing praises to the Lord, to dance and to sing.

Judge: Did you stop these women from singing and dancing?

Nayler: Nay, but I bade them take heed that they sung nothing but what they were moved to by the Lord.

Judge: Art thou the only Son of God?

Nayler: I am the Son of God but I have many brothers (points to the crowd).

Judge: Have any called you by the name of Jesus?

Nayler: Not as unto the visible but to Christ which is in me (points to chest) and you…(points to the crowd)

Dorcus: He raised me from the dead. He laid his hands on me after I had been dead for two days and said Dorcus arise and I arose and live as thou seest now. Gasps from Crowd etc Holy Holy Holy …etc. Nayler looks to sky.

Judge: These followers (points to can-can troupe etc.) does the Lord move or command them?

Nayler: Let them answer for themselves, they are at an age…

Judge: Art thou guilty of horrid blasphemy by their actions and thy own words?

Nayler: Who made thee a judge over them?

Judge: The first charge, that James Nayler did assume the gesture, words, honour, worship and miracles of our blessed Saviour.

The Committee were of the opinion that the first article was proven.

The second charge, that James Nayler did assume the names and incommunicable attributes and titles of our blessed Saviour.

The Committee were of the opinion that James Nayler assumed the name of Jesus and so the second article was proven. James Nayler you are guilty of the most horrid blasphemy, you are the great imposter and seducer of the people. You will be punished.

Accuser: This parliament proposes that the punishment for James Nayler will be death.

Who says aye? …(to the soldiers)…Who says Nay? [Close but No]

This parliament proposes that the punishment for James Nayler will be the cutting of his hair.

This parliament proposes that the punishment for James Nayler will be the boring of his tongue with a hot iron.

This parliament proposes that the punishment for James Nayler will be that he is set in the pillory and whipped.

Nayler is taken to the Pillory where he is whipped (ish)

Judge: Do you still say that you are Jesus?

Nayler: I know how Jesus felt…

Nayler has tongue bored, branded etc. He is taken away.

1656: James Nayler was placed in solitary confinement for three years in Bridewell until 1659. He died a year after this.
2006: James Nayler is taken to the pub and bought a stiff drink.