A map of resistance to World War 1 in Bedminster, a district of South Bristol. It shows the homes of over 40 Conscientious Objectors and others who took part in resistance to World War 1, as well as places where they worked, met and organised, and other sites of significance. The map grew out of research for Steps Against War, a history walk created by Otherstory and a group of local people, in collaboration with Remembering the Real World War 1. The project was supported by the National Lottery […]
Read More »

Where am I? You are on the site of Eastville Workhouse, which opened its doors in 1847. In the 1930s it became an old people's home and was finally demolished in 1972. This page is about the three memorials which are part of the Eastville Workhouse Project. Eastville Workhouse Plaque The plaque is situated on what is now the pedestrian entrance to East Trees Health Centre. This was the entrance to the driveway that led up to the main workhouse buildings. The new medical center was opened in […]
Read More »

This is a map of the Parish of Bitton from 1842. Cock Road can be see just to the right of Hanham. Note that the original is marked 1842 however, the map shows the Midland Branch Line (now the Bristol-Bath cycle track) which was not opened until 1869. See the Avon Valley Railway website for more details. A full version of The History of The Parish of Bitton in the County of Glousceter. by Rev. H. T. Ellacombe can be found on Archive.org.
Read More »

This map from 1750 is of the 'Liberties' around Kingswood and the parish of Bitton. The dotted line running out through Warmly is the London Road (now the A420). The Cock Road, not marked, is just above where “Gee Moor” is written in “Mr Bond’s Liberty”. The houses are labelled with many of the family names that are associated with the Cock Road Gang. It contains many of the family names which are associated with the Cock Road Gang such as (with various spellings) Britton, Wilmot, Ilses, Bryant, […]
Read More »

Home to the notorious Kingswood Miners and infamous Cock Road Gang this is what Kingswood, North of Bristol, looked like in 1610. 'London Waye' is now the A420 and Bath Waye is the A431. A full version of The History of The Parish of Bitton in the County of Glousceter. by Rev. H. T. Ellacombe can be found on Archive.org.
Read More » 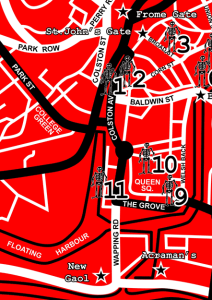 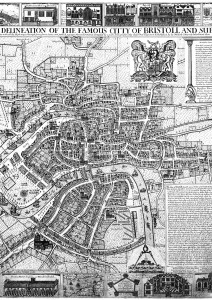 Click the map to zoom in and then click and drag to move around Bristol. Your bowser needs to have a Flash Payer plugin. Alternatively view the map as a large jpeg file (1 mb). You can also download a large hi-resolution file (4.6 mb jpeg file).
Read More »
This website uses cookies for comments, shopping and to gather stats for our geeky pleasure. Read More Accept Reject
Privacy Policy