Not A BRHG Event
Bread or Batons? The Old Market 'Riots' of February 1932 Since the 'Wall Street Crash' of 1929 joblessness in Bristol had risen to unprecedented levels; by February 1932 the situation was critical with whole districts blighted by the effects of mass unemployment. Jobless Bristolians rallied round the National Unemployed Workers’ Movement (NUWM), the main organisation opposing mass unemployment and Government 'means test'. The NUWM responded to the proposed austerity measures by organising a […]
Read More »

Meet at Gardiner Haskins Car Park (near Old Market), New Thomas Street, BS2 0JP As a belated launch for three new pamphlets released by BRHG in 2012-13 (The Bristol Strike Wave of 1889-1890 Socialists, New Unionists and New Women - Part 1: Days of Hope, Part 2: Days of Doubt and The Origins and an Account of Black Friday - 23rd December 1892) authors Mike Richardson and Roger Ball will navigate us through one of the most intense periods of class struggle in Bristol in the late 19th Century. In […]
Read More »
Read More » 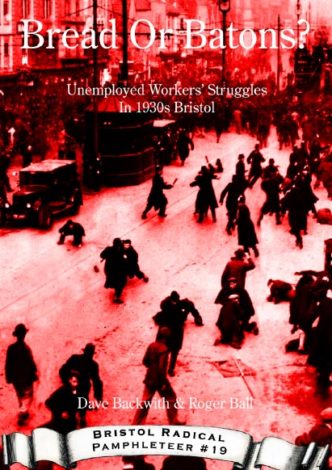 Meet at 2pm at Hydra Books for a History Walk through the streets of Old Market and Central Bristol, where Bristol Radical History Group members will recount the stories associated with the various scenes on route.
Read More »

Revolt of the Unemployed : Bread or Batons in Bristol c. 1932. As unemployment topped 3 million and the Labour government collapsed, benefit cuts and the means test sparked unrest across the country. In 1932 Bristol was briefly at the forefront of the protests which rocked the country. The mass demonstrations met brutal repression including police ambushes and the arrest of key activists. This will discuss the character of the movement, tracing its roots back to the ex-servicemen's protests of […]
Read More »
This website uses cookies for comments, shopping and to gather stats for our geeky pleasure. Read More Accept Reject
Privacy Policy