“Every intelligent person now admits that the antagonism among the nations of Europe that led to competition of armaments and the present world war was fundamentally due to a universal desire to secure increased empires for the deposit of capital, the enslavement and robbery of the conquered races, and the monopoly of the oil, rubber, tin, and other products of the annexed territories” – John Maclean (1918)

Written in 1918, as World War One drew to its bloody close, The War after the War is revolutionary socialist John Maclean’s assessment of the transition from war economy to peacetime. Grounding his analysis in ‘Marxian economics for the working class’, Maclean demonstrates that the great increase in industrial productivity generated by the global conflict had merely laid the foundations for the ‘economic war’ to follow. Maclean predicted that this would both increase the exploitation of the working classes and lead to an even bloodier world war as capitalist countries expanded their empires in the search for new markets.

John Maclean (1879-1923) was a revolutionary socialist and Marxist educator from Pollokshaws, south Glasgow. He was the founder of Scottish Workers Republican Party and the Scottish Labour College.

Afterword for this edition by Jim Slaven.

Jim Slaven is an Edinburgh based writer, activist and founding member of the James Connolly Society. His research looks at the intersection between race, nation and class. He has written widely on Scottish and Irish culture and politics. He is founder of 107 Cowgate, whose educational events and tours explore Scotland’s history and future from a working class perspective. He tweets: @JimSlaven.

First published in 1918 by the Scottish Labour College

Republished by Bristol Radical History Group in association with the James Connolly Society. 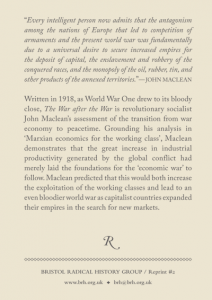