With a new afterword by Kevin Morgan.

A 2015 reprint of a 1915 pamphlet, originally published at the height of reaction during World War One. Proposing class struggle and international solidarity in response to nationalism and war, it’s a unique voice of dissent within the British labour movement of the time. Only a few copies of the original pamphlet exist; there is no copy in the British Library, and even the well-known libraries of labour movement history do not usually have a copy. This facsimile reprint will ensure the continued, and enhanced, circulation of an important work of radical trade union history.

The author, Fred Bramley, a Trade Union organiser from West Yorkshire, later became TUC assistant secretary in 1917 and then general secretary in 1923 until his untimely death in 1925.

Socialists of France, Germany, and Great Britain have, with a few honourable exceptions, made an effort to sacrifice class cohesion and Internationalism on the altar of ‘Nationalism’.

Bristol Radical Pamphleteer has published more than 30 original works since 2008. With this pamphlet, Bristol Radical History Group is starting a second strand of publishing: reprints of hidden, forgotten, hard-to-find, suppressed or marginalised publications.

Class Cohesion versus Spurious Patriotism has been republished in association with the Socialist History Society, www.socialisthistorysociety.co.uk 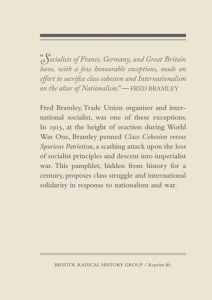