Those keen on heroes
Often find they’ve feet of clay.
Here’s one example:

Churchill had a school-friend
Called Aubrey Herbert
Who, in 1915, wrote in his diary,
“Winston’s name fills
Everyone with rage.
Roman emperors killed slaves to
Make themselves popular,
He is killing free men
To make himself famous.” 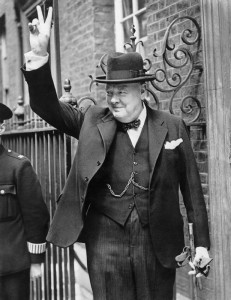 “A curse should rest on me,” Churchill said,
“Because I love this war. I know
It’s smashing and shattering
The lives of thousands
Every moment and yet I can’t help it.
I enjoy every second.”

He wrote this during World War One –
The war to end all wars –
Whose unfinished business
Led to World War Two.
The so-called ‘Good war.’

In World War One,
Keen to acquire oil
From Mesopotamia
For British shipping,
Churchill was happy
To drop poison gas bombs on
Iraqi tribesmen
Who were objecting
To wells dug in their desert
To fuel Britain’s war;
To fuel the ships
That Churchill had decided would run
Better on oil than on coal.

“I don’t understand
This squeamishness about the use
Of gas”, Churchill would say.
“I am strongly in favor of using poison gas
Against uncivilized tribes.”

Because these “uncivilized tribes”
Were holding up his plans
They had to die.
He implied they might be honoured
To die in a civilized cause –
Their being so uncivilized.

Little Englanders,
As Orwell called petty-minded patriots,
Become apoplectic when faced
With the notion that Churchill’s views
And those of Hitler overlap
Both in relation to the use of gas,
And in the elimination
Of “inferior races”.

“I do not admit,” Churchill said
“That any great wrong has been done
To the Red Indians
Of America,
Or the black people of Australia
By the fact that a
Stronger race,
A higher grade race has come in
And taken its place”

Churchill said this in 1937 –
And in the twenties and thirties
He’d often let slip
How much he admired both Hitler
And Mussolini. Fascism
Was no problem for him.
It was the way to counteract
“The virus of Leninism.”

After Hitler came to power, Churchill proclaimed that
“If our country were defeated, I hope we should find
A champion as indomitable [as Hitler]
To restore our courage and lead us back to our place
Among the nations.”
And to Mussolini, whom he addressed
In Rome on 20 January 1927, he declared:
“I could not help being charmed, like so many other people have been, by Signor Mussolini’s gentle and simple bearing and by his calm, detached poise in spite of so many burdens and dangers. If I had been an Italian I am sure that I should have been whole-heartedly with you from the start to finish in your triumphant struggle against the bestial appetites and passions of Leninism.
I will, however, say a word on an international aspect of fascism. Externally, your movement has rendered service to the whole world.”

The Jews, by contrast, Churchill regarded
As a “sinister confederacy… for the overthrow of civilization”
In his book ‘Great Contemporaries,’
Published in 1937, Churchill describes Hitler
As “a highly competent, cool, well-informed functionary
With an agreeable manner.”
In the same book he savagely attacks Leon Trotsky.
‘What was wrong with Trotsky?’ He asked rhetorically.
“He was still a Jew.” Churchill replied,
“Nothing could get over that.”

In peace, Churchill called troops
To shoot striking miners dead
At Tonypandy,
So he’s not much loved
By the Welsh.
Nor by the Irish,
In April 1904 he said,
“I remain of the opinion
That a separate parliament for Ireland
Would be dangerous and impractical.”
Nor by the Indians:
He worshipped the Raj,
And he told General Smuts
That he should have killed Gandhi,
When Smuts had the chance.

“I hate Indians.
They are a beastly people with a beastly religion.”
Churchill played a part
In the Bengal famine by
Raising rice prices.
The population
Was thus reduced and the poor
Were less burdensome.
Seven million died.
Churchill refused to send aid
As they’d “breed like rabbits”. 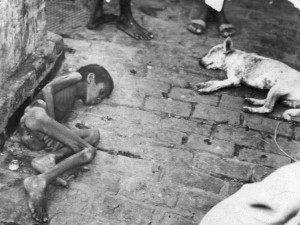 He and Bomber Harris,
Firebombed innocent lives
In Dresden, calling it
“Terror-bombing”. –
They were pleased at their discovery
Of a new kind of war,
Namely to kill civilians deliberately –
To demoralize the enemy.
(They burned five hundred thousand)
For the sake of it.

Churchill had asked for “suggestions
How to blaze 600,000 refugees”,
And then he ordered the firebombing of Dresden
As a “vicious payback” for the German bombing
Of Coventry (which Churchill himself had allowed to burn
Rather than reveal his access to the German codes). 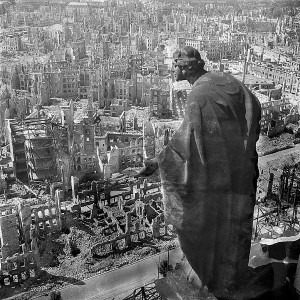 Later he’d ask himself, with a perverse pride,
Against a background of burning bodies,
‘Are we beasts?”

He was addicted to war.

His first experience of it
Was in Afghanistan.
On September 12, 1897 his camp came under sniper fire.
Churchill was having dinner
With a Major-General Sir Bindon Blood
When “a bullet hummed by overhead”.

The incident strengthened Churchill’s view
That a local Pashtun tribe, the Mohmands,
Needed to be dealt with.
“After today we begin to burn villages. Every one.
And all who resist will be killed without quarter.
The Mohmands need a lesson,
And there is no doubt we are a very cruel people.”
Such action was vital, Churchill argued,
Because the Pashtuns “recognise superiority of race”.

Churchill considered he’d failed
In World War One,
After he’d sent thousands
To their deaths at Gallipoli, to no purpose,
And at the Dardanelles, to no purpose,
He was then sacked.
Consequently he spent years
Licking his wounds
And seeking out an opportunity
For a return march.

In ‘Human Smoke’ Nicholson Baker
Shows how complicit Churchill was
In provoking World War Two:
He bombed Berlin
And then he kept asking de Gaulle
‘Why haven’t they bombed us yet?’
He’d relish the London Blitz
Just because it now warranted
A great crack at the enemy,
Not because he cared tuppence
About defeating fascism.

He enjoyed stabbing dervishes in the neck
At the battle of Omdurman, and he said so.
“I hate nobody except Hitler — but, that is professional.”
In other words there was no great difference of opinion
He just wanted to fight Hitler, or anyone.

He cared nothing for the Jews whose genocide
The war would arguably accelerate
Churchill just got off on war.
His moral compass was set
Towards self-glorification,
Even if it required fabrication.

“In time of war,” Churchill said, “when truth is so precious, “it must be attended by a bodyguard of lies”
And every imaginable lie has attended his life.
A life fetishized by Tory devotees
Who speak in hushed tones
When they mention the name of their unholy fascist
Who worshipped force, the deadlier the better.

Churchill said, “I like a man who grins when he fights.”
But his magniloquent language and the great claims
Made for him conceal a squalid truth,
That he’d loved war ever since he was a child
When he’d studied the Blenheim Palace tapestries
In which his ancestor, Marlborough,
Was depicted slaughtering 30,000 Frenchmen
And plundering Bavaria
All because of an obscure squabble
Over the Spanish succession.

An unhappy boy in a Palace,
Abandoned by a nymphomaniac mother
Ignored by a syphilitic father,
And silenced by a speech defect,
Would sit in a long corridor transfixed,
Hypnotized by massacres
And would then spend his later life looking for battles
To shine in, however many bodies he left in his wake.
The Toryboy’s household god
Who once said “Politics is almost as exciting as war“
In other words a man excited by the deaths of millions.

Towards the end of his life
Something of his own enormity
Must have visited him,
For he’d curse what he’d call
The “black dog of depression”
Which was only relieved by
Alcoholic self-medication –
Pickling a brain whose troubled thoughts
Could, in the end, only be subdued by a stroke;
The oh so good man
Who fought his oh so good war.

By way of rebranding him,
Churchill’s dark, brooding statue
In Parliament Square
Has had a green turf strip
Surreally crown its bronze head
Like a Mohican hair-cut,
And red paint spills out of its mouth
To symbolize the advocacy
Of bloodletting
By this uncivilized brute
In the wars he so loved
And so effusively praised. 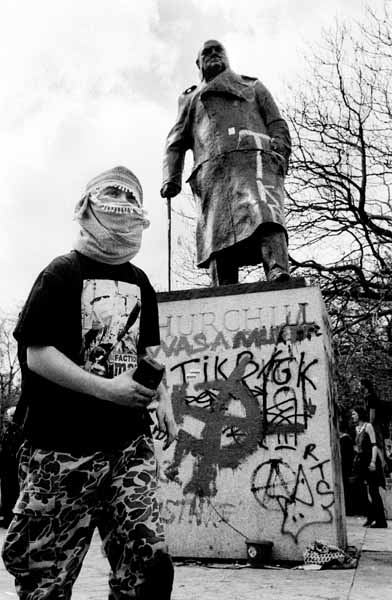