A Life of Pleasure

After a tip off last year by a member of BRHG I took a trip to Bristol Archives to take a look at some diaries written by Harry Bow in the 1890s.[1] Bow, a Bristolian, was an enthusiastic ‘army spotter’, that is, he loved to record and illustrate public displays of the British military in the late Victorian period.  Amongst the notes and beautiful line drawings recording parades, army camps and the use of cavalry against Bristolian trade unionists and their supporters on ‘Black Friday’ 1892 was the following illustration: 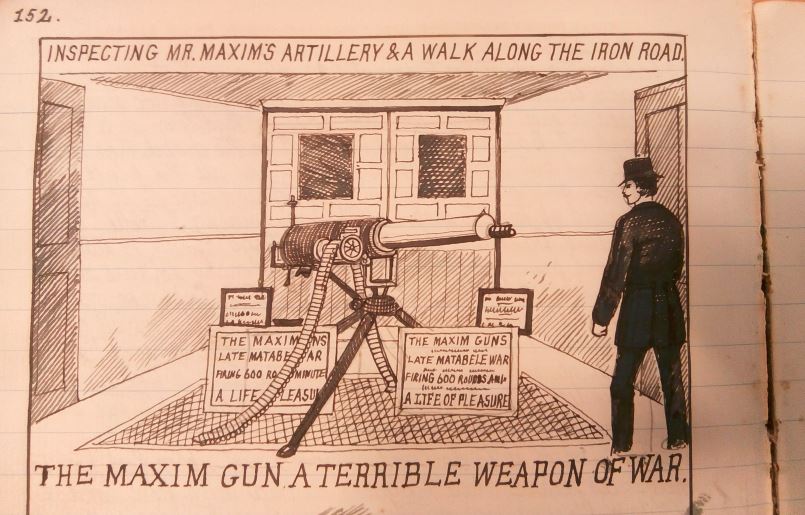 In his diary Bow explains the origin of his drawing:

Wed May 29th…at noon I went up on Park Row to the Princes Theatre where the grand drama down from London “A Life of Pleasure” was on this week in which there are some fine battle scenes of the Burmah war with soldiers, guns etc. and inside the vestibule I seen fine Maxim quick-firing gun on view. real one what they use in the performance & they got two or three of them altogether. I inspects this one with interest. and it was a fine one on three legs. cartridge belt and feeder, and was a terrible & deadly weapon capable of firing 600 shots a minute and they were used in the Matabele War, and the recent Chitral Campaign [2] etc. and did terrible execution among the enemy, and mows down like sheaves of corn. it was the first time I had seen such a fearful weapon, which far excels ordinary field artillery in rapid and destructive firing indeed.[3]

The “sensational drama” A Life of Pleasure that the Maxim gun was advertising was written and produced by Augustus Harris and Henry Pettitt, premiered at the Drury Lane theatre in 1893 and moved down to the Princes Theatre, Bristol in December of that year.[4] The play, a stock Victorian melodrama where a woman falls victim to a heartless upper-class seducer and is finally rescued by her father, is not of any particular note.[5] Of far greater interest is the “sensational” penultimate act, as described by the Bristol Mercury:

Then comes the great act which is placed in Burmah [Myanmar], where Lord Avondale [the hero] has gone on duty. First there is all the bustle and humour of a camp, then the British force is marching through a jungle, with a deep nullah [ravine] between them and safety. A devoted horseman takes a flying leap across the chasm, then the pontoon train comes up and the bridge is built, across which the baggage and troops pass in safety. The enemy pursue but are received with volleys from the Nordenfelt guns[6] which blaze away in the most alarming fashion until the stage is full of dead Burmese. This splendid scene is worked by members of the 2nd Tower Hamlets Volunteers and beats the record even of Drury Lane.[7]

Having a stage “full of dead Burmese” was an accurate reflection of the butchery British forces were handing out to those who would dare to oppose their Imperial and colonial ambitions. Central to this was the use of artillery and the heavy machine gun against poorly armed or even unarmed opposition.

The play refers directly to the third Anglo-Burmese War of 1885 which led to total British rule over the country after a series of invasions and annexations by the British in the nineteenth century. Fearful of cordial relations between the French and Burmese governments, the British decided to seize the remainder of independent Burma by military force. Along with the invasion units which included 10,000 troops, gun boats, artillery and 24 machine guns the British also employed lies and deception. In their propaganda fed to the Burmese they claimed that they did not intend to occupy the country for long, only to replace the present King with his more popular half-brother, a Prince who had been in exile in India. However, the British knew the Prince had died several months before and some sources state that they used an impersonator in his place to convince the Burmese of their ‘honesty’.

The ruse worked brilliantly, creating confusion and convincing some that the British were genuine. Before the Burmese could react effectively they had been overrun by British forces that advanced rapidly up the Irrawaddy River. Any military resistance was mercilessly crushed and on November 27th 1885, two weeks after the invasion, the King was taken prisoner and the Burmese forced to surrender. Burma was official annexed on 1 January 1886 and the British then proceeded to systematically loot the major cities and towns, taking gold, jewellery, silk and ornamental objects as well as items of more practical use such as arms, machinery and river steamers. Items which could not be moved easily or were of lesser value were auctioned off to British military and government officials.

Despite the military defeat, the Burmese fought a ten year guerrilla war against British rule which was only finally broken by meting out collective punishments to the civilian population. Villages were burned and the property of villagers either confiscated or destroyed. The British policy of overwhelming reprisals against villages suspected of assisting the insurgency eventually brought the country under control. British colonialism was triumphant.[8]

The display around the machine gun advertising the play in Bristol also had a couple of placards stating:

A Life of Pleasure

The notorious use of heavy machine guns by British forces against massed lightly armed opposition is probably most exemplified by the colonial campaigns in Africa. For example, the Matabele War to which Bow refers in his diary is the conflict of 1893-1894 which saw Cecil Rhodes and his military cronies butcher their way to occupying the western half of present-day Zimbabwe. In 1890 para-military forces of the British South Africa Company (BSAC) penetrated deep into Shona territory to establish Fort Salisbury (modern-day Harare). Over the following few years they attempted to take control of the region and its resources by extending their laws and policing over the resident ethnic groups.

In 1893, after a border raid by Ndebele (Matabele) warriors[9], who had been careful not to come into conflict with the white settlers, Rhodes decided to act. A force of 700 BSAC men equipped with five Maxim heavy machine guns marched on the Ndebele king’s capital at Bulawayo. In their first major engagement on 25 October the column was attacked by 3,500 Ndebele warriors. The Maxim machine guns proved decisive, “mow[ing] them down literally like grass”, leaving 1,500 warriors dead. The BSAC lost four men. This pattern was repeated a week later when 6,500 Ndebele engaged the column again, this time with 2,500 killed by the Maxim Guns. As the Ndebele army retreated, British forces captured Bulawayo. Over the following months the Ndebele succumbed to superior British firepower and Rhodes tightened his grip over what would be named ‘Rhodesia’ in 1895. Over the whole campaign the British suffered around 100 killed and wounded compared to over 10,000 of the Ndebele. The Matabele War of 1893-1894 saw the first use of Maxim guns by Britain and they proved to be decisive both in practice and in spreading terror amongst colonial subjects.[10] As even our patriot and militarist Harry Bow noted, they truly were “a terrible weapon of war”.

As I write this article on the 100th anniversary of the armistice in World War One a few thoughts come to mind.

First, the militarised remembrance ceremonies this week have often been framed as ‘we must give thanks and remember those who sacrificed their lives to give us our present-day freedoms’. I am not sure how this oft parroted statement relates to the terror unleashed by British forces across the globe from behind heavy-machine guns twenty-years before World War One. Will we be mourning the thousands of Burmese and Ndebele dead (and numerous others) who were trying to resist the colonial invader in the face of machine guns? As we seem to fail to remember even the non-British dead in World War One, I doubt it. No poppies for the Ndebele then…

Second, as has been pointed out by several commentators, Britain’s entry into both World Wars was supposedly based on protecting ‘small nations’ from ‘large aggressors’ with superior military forces (Serbia and Belgium in WW1 and Poland in WW2). The hypocrisy of this statement in the face of Britain’s invasion and oppression of numerous smaller nations and ethnic groups all over the world using deceit, brutal violence and overwhelming military force is astonishing.

Third, I won’t be looking at the Victorian theatre in the same way. I am not sure how glorifying the firepower of the Maxim machine Gun in butchering soon-to-be colonial subjects can be read as A Life of Pleasure. But then Victorian England was a pretty sick society and it clearly extended into its melodramas.