In World War 1 there were at least 40 conscientious objectors in Bedminster, as well as others who resisted the war and conscription.

Annie Chappell co-ordinated a network of support for objectors.

William Livingston went on the run in Scotland with London anarchists.

George Barker and Walter Told excavated a secret chamber beneath a bike shop to hide objectors and deserters.

These individuals were part of a network of neighbours, workmates, families and comrades who stood together and refused to take their part in the war machine.

Steps Against War is a microhistory of resistance in a working-class district of south Bristol, together with two self-guided history walks.

There are two articles on this site about the walks described in this pamphlet:

This is more than just an impressive work of local history but one which has been pursued with steely and scholarly determination, enviable creativity and a real feeling for its places and people. It is remarkable to see what can be done and what insights can be shared from such a close and detailed study of one particular neighbourhood. ‘Micro history’ it might be but the impact and implications are far from small.

Cyril Pearce, author of Communities of resistance: Patterns of dissent in Britain during the First World War

Immediately readable, this well organised and well researched 82 page book carries its erudition lightly. The account moves forward while providing reference notes conveniently at the bottom of each page. After presenting the reader with Bedminster in the first years of the twentieth century we are quickly into the need to muster courage. For many it was the courage to enlist but for the subjects of this book it was the courage to stand against the mood of the time. They needed to find ways to express their beliefs, and find allies to assist them, even though that would take them outside the law. We are shown the grave consequences of their decisions.

As we are currently being reminded, there is always more than one narrative for any historical period.

We tend to think of the First World War’s conscientious objectors as solitary figures, isolated by their principles and determined to take a stand against the almost universal tide of support for the conflict. Steps Against War gives the lie to this view, showing that in just one area of South Bristol, there was a dedicated network of anti-war organisers. Scores of ‘conchies’ from Bedminster alone resisted the draft, and many spent years in prison for their beliefs. What’s less well known is that many escaped, hiding in a secret underground chamber in the heart of Bedminster, or spirited away to safe houses in other parts of the country. Some made it overseas to Ireland or the US.

This book sets the war resisters in context, filling in the gaps in our knowledge about a movement that was bigger and better organised than many will know. It’s a fascinating read  and valuable not just to Bristolians but to anyone who wants to know the hidden story of conscientious resistance to the First World War. 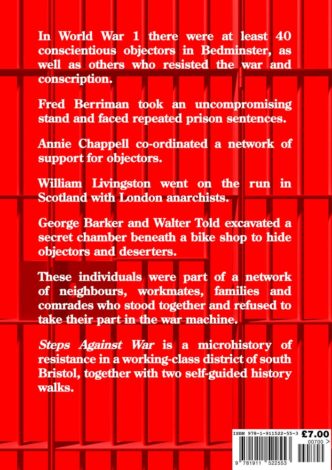