Walter Ayles was a fighter – but a fighter who didn’t believe in killing. He fought against unemployment and ruthless employers but also against the pro-war fever that led to the First World War. A Bristol councillor before the War, he was sent to prison for his opposition to it. Soon after his release, he was elected the MP for Bristol North.

This pamphlet outlines the life and times of a man who fought for socialism and peace. 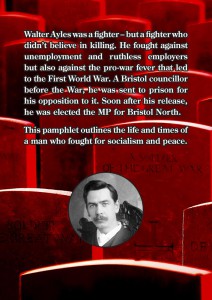