During World War One a significant minority of women and men throughout the country took part in a peace movement. They demanded the democratic control of foreign policy, a negotiated peace and a just, non-punitive settlement at the end of the conflict. They also joined with the wider labour movement to oppose conscription. The nature of the anti-war movement, its leadership and the alliances made varied from city to city.  In Bristol it was socialists of the Independent Labour Party who provided much of the energy and personnel for the campaign.

This pamphlet explores the activities and ideas of women and men of the ILP, including Walter Ayles, Annie Townley and Mabel Tothill.  It examines the significance of friendship ties and cross party alliances, some of which were forged in the pre-war suffrage campaign.  It also assesses the impact of peace activism on labour and gender politics in the city. 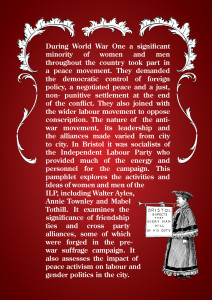