During World War One, 28 men from the Forest of Dean sought recognition as conscientious objectors rather than be called up to fight. This is the story of these men, the options available to them, the way they responded and what they did after the war. Ring Out the Thousand Wars of Old explores the role that religion, class, culture and place had on these individual decisions. It argues that the actions of the conscientious objectors were an expression of a much wider anti-war sentiment, reflecting increasing war weariness as casualties mounted and opposition to conscription grew.

#42 Ring Out the Thousand Wars of Old 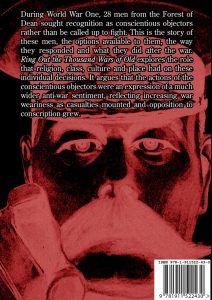