Warren James was a man who was caught up in the social unrest that swept through the Forest of Dean in 1831, and who emerged as spokesman for the Foresters in their struggle to protect their ancient rights and way of life. The Forest Riots of 1831 were about insecurity, fear, poverty and starvation as a result of enclosures, enforced wage labour or unemployment. The Foresters fought to resist the twin onslaught from the Crown, who owned the Forest, and from businessmen who sought industrial profits from it.

The 2nd edition is revised, slightly extended and has a new front cover by Clifford Harper. 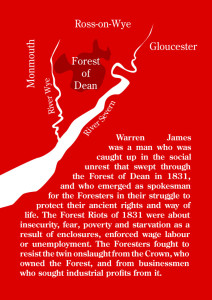