Reclaim the Hill!: A celebration of the radical history of Brandon Hill and Stop the College Green Dispersal Order

Despite the vagaries of the English summer of 2007, a small but feisty mob of radical historians, skate boarders and cider drinkers gathered on Brandon Hill in Clifton on August 19th. We were both celebrating the 175th anniversary of the invasion of the Great Reform Dinner and protesting against the dispersal order served on Bristol citizens this summer. What is the connection?

Steve Poole, director of the Regional History centre at UWE gave an interesting talk [1] on the struggles to retain Brandon Hill as a popular gathering place for political meetings, parties and cultural events in the 18th and 19th century. From the unruly ‘mob’ of the 18th century to the Chartists of the 19th, the oldest public open space [2] in Bristol, Brandon Hill was at the centre of the contestation of popular territory in our city.

Key events in the hill’s history included the ‘mass gate crash’ of the Great Reform Dinner in 1832. After the enfranchisement of a small section of the middle classes by the passing of the Reform Act in that year, a celebratory banquet on Brandon Hill was organised by the reform parties, mainly to woo the new voters. 6000 expensive tickets were sold and the party enclosed by barricades as the organisers knew Brandon Hill was a popular public space for ordinary Bristolians, and they definitely weren’t invited!

Unfortunately, for the middle classes, 14,000 Bristolians turned up early, overwhelmed the barricades, ate the food, drank the beer, danced on the tables and had a free party Bristol style. When posh types tried to intervene they were robbed of their hats and shoes, verbally abused and one was stabbed. Barrels of beer were rolled down the hill to the poorer districts and a wagon of dumplings was hijacked on the Hotwells Rd!

How you can read the why’s and where fore’s of these events in different ways, a criminal, chaotic mob just out for themselves, the excluded of Bristol affronted by the enclosure of their hill by a bunch of posh types or just a misunderstood day out for people of ‘low description’. I think that the connection with the 1831 ‘riots’ [3] is the only missing element. We must remember that many of this raucous crowd were certainly involved in the one of the most destructive and influential uprisings of the 19th century. These cataclysmic events had been sparked off by the protests against the defeat of the Reform Bill in 1831. Many of the rioters may have believed (correctly in my opinion) that despite their own agendas, they had by their actions, shocked the British ruling class into accepting reform in 1832. They of course did not get the vote and now the newly enfranchised middle class were celebrating their ‘victory’ on the ‘People’s Hill’. Less than a year had passed since the poor of Bristol had been burying their numerous dead, massacred by Dragoons at the end of the uprising. We can only imagine their feelings about this. So Brandon Hill became a site of contestation of public space but also of the people’s history. Ironically, opponents of reform, used the event to try to show where popular democracy would lead us! [4]

The contestation of Brandon Hill between the Bristolians and the Corporation and Cliftonites wound on through the century. Despite the successful efforts of the Chartists in the 1830’s and 40’s to protect the space in order to hold mass meetings for democracy (they even set up their own armed Brandon Hill ‘police force’ to intimidate the constabulary and reinforce popular control of the hill!), ‘victory’ was finally achieved by the wealthy of Clifton with the construction of the rock gardens to inhibit the use of the top of the hill for meetings and symbolically with the construction of the Cabot Tower commemorating the mercantile explorer. [5]

From Brandon Hill to College Green A short walk down Brandon Hill towards Bristol City centre, leads you to College Green bounded by the Council House, the Cathedral and Park St. This ancient spot first appears in historical sources when a shrine to St. Jordan was constructed there in the early 7th Century [6]. This connection to the church is important, as attempts by Bristol merchants to gain control over this valuable real estate (at that time a graveyard for the Augustinian monastery which lay on the site of the current Cathedral) were successfully resisted by the Abbots. The choice of the site of the Cathedral in 1542 is also significant as it secured the green as an endowment for the new building and allowed it to be developed as a pleasant green space in the city centre. By the 17th Century, College Green had become a popular place for recreation for Bristolians and in 1634 a report sponsored by Archbishop Thomas laud stated ‘it is made a receptacle for all idle persons to spend their time in stopball and such lyke recreations, even oftimes from morning until night, the time of divine service not excepted’ [7].

An ironic echo of this problem of Bristolians having fun on College Green rather than going to church appeared in 2001 when the Dean of Bristol Cathedral complained that skateboarders were disturbing his services and intimidating his congregation [8]. He went on to call for a bylaw that would prohibit skateboarding on College Green close to the Cathedral. At the time, Avon and Somerset Police responded by saying ‘We are not keen to prosecute youths pursuing a sporting past-time when these things can deter youngsters from crime’ [9]. Councillor Helen Holland of Bristol City Council weighed in with ‘Skateboarding is an essential part of the city’s culture. We need to make sure the balance is right to give skateboarders the opportunity that they want’. So it all looked rosy for the freedom of Bristolians to use the green.

Echoes of the struggles for Brandon Hill

This summer the police without warning served a ‘dispersal order’ on College Green and the surrounding area for the period of the school holidays. The order means that if two or more people gather together then, they can be moved on by the Police. Ostensibly, the order was aimed at the skateboarders and other youth who have customarily gathered on College Green for many years. No reasons were given initially for the order, but we can imagine that the effect on tourism would have been sited [10] (College Green is a an historic site, with the Cathedral, Council House etc.) along with the usual complaints of the wealthy and powerful Clifton ‘mafia’.

The youth reacted in style with a demonstration or two and an active media campaign protesting against the order [11]. The authorities seemed unable to come up with the real reasons for their actions, except a feeble media campaign which vaguely referred to fighting and drug use. Even a Bristol MP [12] advised the Police to talk to people first before imposing such orders, but they didn’t appear to be in the mood to debate with the Bristolians using the area!

If they had engaged in a debate, then the authorities would have found out some important facts. Namely that there was serious resentment already amongst the skateboard community because of the cynical last minute rejection by the Council of the fully-funded plan for a skateboard park next to Castle Park. Of course, within months the whole area had been handed over to property developers [13]. The skateboarders were thus resigned to staying at College Green. That was until the authorities decided to remove that public space as well, by serving the dispersal order.

Despite the current media climate of viewing many young people as ‘scum’ (or even wanting to ‘hug’ them), no one is pointing out that they are Citizens like anyone else. Citizens have the right to go into the centre of their city, full stop. The authorities are trying to impede them and their right to free movement. This is wrong. If people commit a crime then the Police can arrest them, but these exclusion orders are a different kettle of fish. They criminalize our citizens and create division, fear and distrust. As one skateboarder put it ‘if skateboarding is anti-social, they would have to put dispersal orders everywhere’ [14]. It may not be too far into the future that this might be the case.

The history of Brandon Hill gives us an understanding of the use of legal and physical means to control and modify public space in our cities. The lessons are clear, if the customary practices of the population can be impeded or stopped then they will lose their cultural power over the spaces they inhabit. We only have to look at the sanitised and ‘class’ cleansed park that Brandon Hill has become to see that. There are, however, echoes of the historical resistance of the Brandon Hill mob and the Chartists amongst the Bristol Citizens that are fighting to keep College Green open to all. 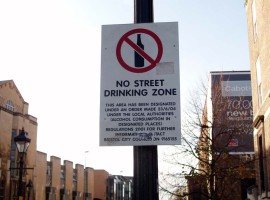 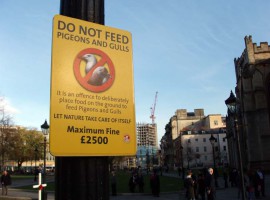 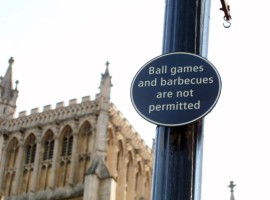 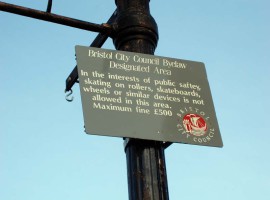 Thanks go to Steve Poole and Craig Ruckus who spoke at the event and all those who attended ‘Reclaim the Hill!’ for an interesting afternoon.