The emergence of ‘New Unionism’ in 1889, and the accompanying outburst of strikes across the country, was one of the most extraordinary and significant events in trade union history. Tens of thousands of ‘unskilled’ labourers, men and women, struck work, demanding an immediate improvement in their working conditions. In Bristol, gasworkers were at the helm of this revolt.

Exasperated by the directors of the Bristol United Gas Light Company’s habitual disregard for their employees, early in October 1889 the whole of the workforce engaged in the manufacture of coal gas walked out. This was the first major and successful strike in the gas industry since the creation, in March 1889, of the National Union of Gasworkers and General Labourers of Great Britain and Ireland.

Violent clashes between police and striking gasworkers and their supporters from local working class communities (referred to as the ‘mob’ by the Company and the Chief Constable) featured in this dispute. However, this was no spasmodic strike. Its origins are complex. Although the 1889 strike did constitute a turning point in the emergence of a labour movement in Bristol, the dramatic moments of working class resistance always have deeper roots. This study provides an extended view from the beginnings of the Bristol gas industry in 1815 up to and including the strike in October 1889.

Mike Richardson says three important things in this short study of the Bristol gasworkers. First, that the gasworkers in Bristol had been emerging at least as far back as Peterloo; second, that the strikes of 1889 (New Unionism) came out of many decades of trade union activity and, finally, that the gasworkers had massive community support. None of this should really surprise us but we have perhaps overlooked just how important gas was to the towns and cities of Britain in the 19th century and that gasworkers’ workplace organisation reflected the power that they had by the 1880s.

The Bristol United Gas Light company emerged in 1853 from two competing companies. Gas was a highly dangerous substance in Britain’s cities but it was lethal to gasworkers: they were 40% more likely to die of bronchitis than other males and 33% more likely to die of pneumonia and to this was added long hours and a harsh regime. Strikes began in 1830s London, terrifying the government that riots would break out in the darkness. Further strikes followed in the 1870s and in the 1880s workers at Bristol’s three gas stations came out on strike, strongly supported by local activists like Miriam Daniell and Helena Born. The 1889 strike called for a range of long-overdue improvements in pay and conditions and involved huge battles at local train stations to stop scabs. Local community support and mass picketing ensured that the strikers were victorious.

Mike’s meticulous research (including maps, sketches and photos) shows that we need local working-class history in order to under-stand the wider context of the so-called ‘big’ turning points and that those who organised must not be forgotten. C’mon Mike Leigh, film the Bristol gasworkers’ strike next! 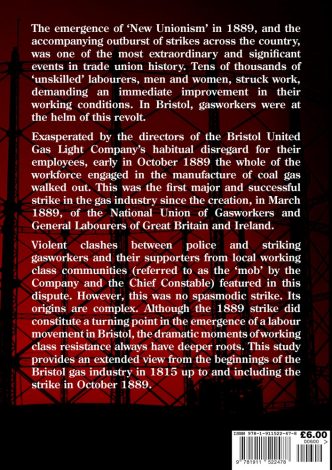