1910 saw a renewed outbreak of industrial strife as significant sections of the trade union rank-and-file began to express their frustration at the lack of progress made in their struggle for better working conditions and a new social order.  Strikes reached levels not seen since the ‘new unionism’ upsurge of 1889-92.  Worker unrest combined with clashes over Home Rule for Ireland and the militant tactics of suffrage campaigners added to the problems of the ruling class who, confronted by these parallel rebellions, feared their convergence and some warned of the danger of revolution.

Bristol and the Labour Unrest charts Bristol’s experience of industrial strife between 1910 and the outbreak of the First World War in August 1914. Rather than focus on some of Bristol’s famous union leaders such as Ben Tillett and Ernest Bevin, this account scrutinises the events from the union rank-and-file perspective. 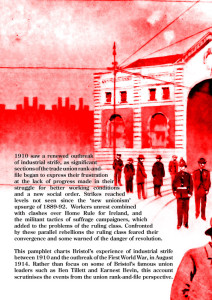