The Seven Stars pub in St Thomas Lane (next to the Fleece and Firkin) is without doubt a remarkable pub. It has survived the Blitz, post and pre war planners, new roads (such as Victoria Street) and all of the brewery ‘re-organisations’ and changes in fashion.

It even lost the community that surrounded it, but it’s still there, a beacon on our past.

The reason its survival is so important is due to one man, Thomas Clarkson, and if it wasn’t for Bristol Civic Society nobody would have been aware of it. Many years ago they acknowledged the world wide importance of the place, and of Clarkson’s work, and positioned one of their coveted blue plaques outside.

But for this, the pub might have been yet another casualty in Bristol’s sometimes painful evolution.

The earliest reference to the pub is in the Bristol Record Office. It mentions Sir John Hawkins, who, whilst buying what was to become the Georges Brewery, acquired it in 1694 from the Saunders family brewing dynasty “…a half tenement, the sign of the Seven Stars, St Thomas Lane”.

It would have remained an anonymous and mundane back street Bristol boozer had not Clarkson arrived on the scene in 1787 and forced it onto the world stage. It was here he gathered the evidence that changed public opinion which eventually led to the abolition of slavery throughout the world.

Thomas Clarkson was a tall, large man, with an uncanny resemblance to Dr Who star Jon Pertwee; he was haunted by the sufferings of others and developed ulcers. One of his friends, Samuel Taylor Coleridge, called him a “moral steam engine” and a “Giant with one idea”.

Whereas for his friend and fellow campaigner William Wilberforce – who usually steals the limelight – abolition was a secondary issue whose aim was the Christianisation of India.

Whilst at Cambridge, Clarkson won a Latin essay competition in 1785 and the vice-chancellor set a new contest with the question “Is it lawful to make slaves of others against their will?” No one had taken both prizes, and the 21 year old Thomas decided to have a go.

He drove into the subject with his usual zeal, but the knowledge he acquired about slavery proved shattering. He later said “It was but one gloomy subject from morning to night, I sometimes never closed my eyelids for grief. It became now not so much a trial for academic reputation as for the production of a work which might be useful to injured Africa”.

With convincing evidence, strong reasoning and raw emotion, he won the contest with a truly seminal work. After translating it into English, expanding it and adapting it for a wider audience, it became a best seller in 1786 as “An Essay on the Slavery and Commerce of the Human Species, Particularly the African”.

He believed so passionately in the truth of what he had discovered that he decided “it was time some person should see these calamities to the end” and by risking his own life and limb, he did.

The major seaports of London, Bristol and Liverpool all flourished on the Slave Trade, and he decided to investigate them to gather evidence. He came first to Bristol in 1787.

On seeing the city for the first time he wrote “It filled me, almost directly, with a melancholy for which I could not account. I began now to tremble, for the first time, at the arduous task I had undertaken, of attempting to subvert one of the branches of the commerce of the great place which was now before me.”

In the beginning, people were willing to talk to him, but as news of his mission spread, it became increasingly difficult. “The owners of vessels employed in the Trade there, forbad all intercourse with me. The old captains, who had made their fortunes in it, would not see me. The young, who were making them, could not be supposed to espouse my cause to the detriment of their own interest.”

Despite various threats, he repeatedly visited the city’s dockside inns and taverns, commenting on some as follows: – “These houses were in Marsh-street, and most of them were then kept by Irishmen. The scenes witnessed in these houses were truly distressing to me; and yet, if I wished to know practically what I had purposed, I could not avoid them. Music, dancing, rioting, drunkenness and profane swearing were kept up from night to night….”

Although despairing of success and suffering from loneliness and depression, he persisted, and after befriending landlord Thompson of the Seven Stars (another unsung hero from Bristol’s past, about whom little is known) Clarkson’s efforts began to bear fruit.

He learned that just like their counterparts in the Navy, Slave ship owners used any means available to recruit sailors aboard their vessels. Getting their victims blind drunk, in debt or by just cracking them over the head, was all fair game to these ruthless individuals.

When he probed further he realised that these sailors were as much victims as the African enslaved. As Madge Dresser states in her book “Slavery Obscured”: –

“Clarkson’s real triumph was to show, using a sample of 20,000 names derived from ships’ muster rolls, that far from being a ‘nursery for British seamen’, as anti-abolitionists had argued, ‘more persons would be found dead in these slave vessels from Bristol, in a given time, than in all the other vessels put together, numerous as they were, belonging to the same port’.”

The great man then began to investigate the actual ships that were engaged in the Traffic.

In “Bristol Observed”, J.H.Betty writes: – “a small vessel of only 25 tons was destined to carry seventy Negro slaves from Africa to the West Indies; while a little sloop of 11 tons which had been built as a pleasure boat to accommodate six persons, was destined to carry 30 slaves. The 30 slaves were to be kept below decks in a space 24 feet long and between 4 and 8 feet wide and a mere 2 feet eight inches high.”

Contrast and compare this with the Matthew of 300 years earlier: – 85 tons and a crew of 19 including the captain.

Due to intimidation, Clarkson’s next monumental task was to get people to testify, and ultimately he did. To put his bravery into perspective, when he went to Liverpool to gather evidence, he was set upon by some sailors who had been paid to assassinate him, Clarkson only escaping by the skin of his teeth.

Thanks to Clarkson, the abolition of the Slave Trade occurred in 1807 – twenty years after he crossed the threshold of the Seven Stars pub – and Slavery itself was abolished throughout the British Empire in 1833.

Even though Wilberforce’s sons tried to belittle his achievements in 1838, he became the father figure of the abolitionist movement, and throughout the 1830’s and 1840’s, American leaders of their fledgling movement made pilgrimages to his home.

In November 2006, I was asked to give some background on the Seven Stars at a week long event being held by the Bristol Radical History Group. Whilst speaking about Thomas Clarkson’s work, Peter Linebaugh – one of the Radical History Week’s star speakers – pointed out that in America, the Plough (which the Seven Stars represent) played a huge part in the freeing of slaves in the Southern States.

He then went on to say that the North Star (where the Big Dipper, as the Plough is called in America, points the way) is now known as the Freedom Star, and the ramifications of all this made the hairs on the back of my neck stand up. What Trade Mark did the Wills family of tobacco baron’s use? They used the sign of the star. 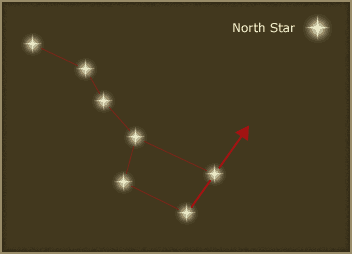 Also doubly mind blowing, is the fact that the pub could have had any one of 850 other names according to “Bristol Inns and Alehouses in the Mid-Eighteenth Century” (a research booklet generated by Bristol Record Office) it could so easily have been called “The Ship”, of which there were 37 in Bristol at this time. The odds of it being called the Seven Stars are over 100 to 1.

Peter also mentioned the Slavery song “The Drinking Gourd” in connection with the Seven Stars and runaway slaves, and as no one else there present had heard of it, I left the meeting determined to try and find out more.

I found that the “Drinking Gourd” is yet another North American name given to the Big Dipper, and it formed the basis of the aforementioned song.  It’s a ‘pilot verse’ (or coded song) which means that, depending on your interpretation, it gives you directions. In former times it was a common device used by seamen in their sea shanties for centuries.

Our particular song though guided runaway slaves, at a particular time of the year, to freedom in the North of America and Canada. It sent people along rivers and trails, where it was difficult for hounds to follow, and across the Mason- Dixon Line.

This became known as the Underground Railroad or the Freedom Train.

A legendary character named Peg Leg Joe (he was a sailor turned carpenter who had lost part of his right leg) went amongst the slaves in the South, and taught them the song. In fact he’s the old man in the chorus. Other songs of this ilk were about Long John and Old Riley who were also escapees.

The chorus of the song goes as follows:-

The words “pivotal” and “epiphany” are perhaps overused a little these day’s, but surely not in the case of Bristol’s most important inn.  Fifty years after Clarkson received help from a Bristol pub landlord named Thompson, the Seven Stars was in use again leading yet more people to Freedom.

Following on from the success of the Bristol Radical History Week, another event was held in March of this year, to try and make more of the pubs significance, and an evening of music and history was organised to make this happen.

The pooling of peoples knowledge led to yet another amazing coincidence. The plantation owners were awarded compensation for the loss of their slave labour (an unbelievable miscarriage of justice to us today) and used some of it to help finance the Great Western Railway. And what was the name of the most popular of the first broad gauge locomotives? It was the North Star! – A freedom train of an altogether different sort.

As already alluded to, the Seven Stars is a great survivor, and now with some exciting plans for the area being promoted by Redcliffe Futures, there’s a golden opportunity to make more of this currently neglected corner of our fair city.

Proposals include a bridge crossing the river from King Street to Redcliffe Street, and for the making of a square in front of both St Thomas Church and the Seven Stars. Ample chance (I would like to think) to recognise peoples Freedom and the role Clarkson played in it, by naming the bridge and the square after the event and the man that made it happen.

In the mean time, how about one of those fantastic “Living Easton” plaques for Redcliffe’s Future, on the outside of the Seven Stars, to augment the Civic Society one?

The following poem is Ellen Gibson Wilson’s favourite of the many tributes paid to Clarkson on his death. It’s from a Quaker in the Lake District: –

A name that scatters light
And teaching on his times, proclaims abroad
How one just man may serve truth, peace and right,
By faith that works for God.

I used her booklet “The Clarkson’s of Wisbech” for some of the background information on the “Giant with one idea”.