The history of Bristol’s Great Western Cotton Works in Barton Hill, which opened in 1838, is little known. The story of its workforce — mainly low-paid women and children — has never been told.

From the 1830s to the early twentieth century, Barton Hill workers endured long working hours, high rates of industrial accidents and ill-health from the cotton dust and humidity. Moreover, they were subjected to wage cuts and fines by a series of unrelenting managers.

Divided along age and gender lines and largely outside the formal trade union movement, the balance of power at the Great Western Cotton Works was skewed heavily in favour of the works’ managers. Nonetheless, Mike Richardson documents frequent acts of rebellion in which the women played a leading part; vocal protests, riotous resistance and thefts of inferior cotton to prevent loss of pay. He shows how workers also took their grievances to court in defiance of the legal bias against them.

A strike in 1889 led the cotton workers into the militant Gas Workers’ and General Labourers’ Union, under the leadership of Will Thorne and Eleanor Marx. Then again when unrest broke out just before World War One, Mary Macarthur was able to recruit the women in the Barton Hill cotton mill into the National Federation of Women Workers.

The Maltreated and the Malcontents: Working in the Great Western Cotton Factory 1838-1914 reveals a gendered working class resistance based on action existing outside the framework of formal organizations as well as within them. 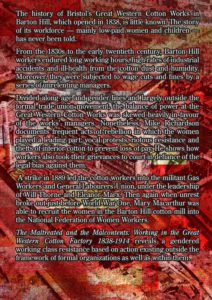