Turbulence describes how the expanding armaments industry of the First World war drew thousands of unskilled and semi-skilled workers – women as well as men- into Bristol’s aircraft factories. Skilled men in the workforce resented their arrival. They also defended their own exemption from military conscription.

Opposition to the dilution of skills through changes in the production process sometimes combined with traditional male hostility towards women at the work place.

Nevertheless the transformed working patterns and sporadic uneasy conflicts altered workers’ consciousness, giving rise to new forms of labour resistance through the shop stewards’ movement and workers’ committees. These both democratized and strengthened the power of workers in Bristol’s wartime aircraft industry but were difficult to sustain after 1918.

This study of labour and gender relations in Bristol’s Parnall and Sons, the British and Colonial Aircraft Company and Brazil Straker & Co. Ltd illuminates a previously neglected history against the backdrop of the national picture.

Note: Turbulence will be published in mid-September 2017. 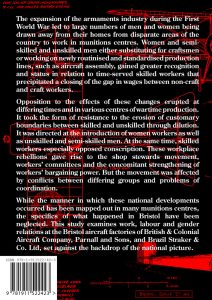