Firstly some firsts. Bristol M.P. Edmund Burke was the author of what was perhaps the first anarchist tract; Westcountryman Henry ‘Orator’ Hunt first pioneered the use of the mass platform for ‘rabblerousing’ against the establishment; Bristol was the home of the first avowedly atheistic journal. This is a survey of home-grown anarchism, with its roots in a tradition of West Country radicalism.

By the end of the Nineteenth Century explicitly anarchist sensibilities had already emerged as currents from within the labour movement. Alongside such well known anarchist and libertarian socialist celebrities as Peter Kropotkin, William Morris and Edward Carpenter, many other colourful and inspiring characters who believed in ‘The Cause’ were to be found here, in the public halls, on the strike committees and in the countryside of our fine Wessex region.

In the Twentieth Century, the wave of syndicalist new unionism affected the West Country before the First World War, while many locals supported the Spanish Revolution during the 1930s, as did Emma Goldman who spent time in Bristol and Bath (often followed by a ‘brace of detectives from Scotland Yard’).

So let’s put on our wide-brimmed flowerpot hats and black cloaks and wander down to the coffee taverns to see who is around. 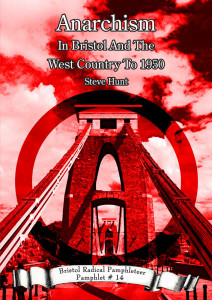 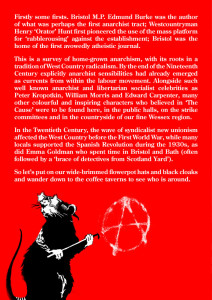