In 1909, Bristol Garden Suburb Limited was set up to implement the ideas Ebenezer Howard popularised in To-morrow: A Peaceful Path to Real Reform. However, Bristol’s most authentic Arts and Crafts-style garden suburb, in Shirehampton, boasted only two streets when the outbreak of the First World War halted construction.

In the inter-war years, garden-city principles inspired the building programme designed to deliver ‘homes fit for heroes’, with developments at Sea Mills and the Fry’s chocolate factory at Keynsham.

However, Howard’s principles were diluted in the construction of the city’s municipal housing estates, first at Hillfields, then at Knowle West, Bedminster, Southmead, Horfield, Shirehampton, Speedwell, St Annes and the late 1940s garden suburb at Lockleaze.

In the light of current debates about sustainable development, garden villages and eco-towns, Steve Hunt’s Yesterday’s To-morrow is a timely re-evaluation of the garden-city principles and shows that Howard’s vision continues to be relevant today.

Read an article about this pamphlet in the Bristol Evening Post.

The 2nd edition, revised with lots of pictures added, was printed in February 2015. 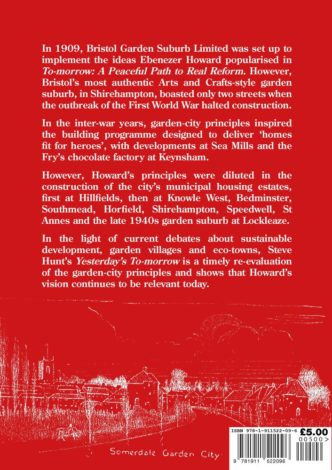