Edward Carpenter (1844-1929) was one of the most progressive thinkers, writers and activists of the late19th and early 20th century. He was an early supporter of the Bristol Socialist Society and paid regular visits to the city. Now remembered and celebrated mostly for his support for libertarian socialism and gay politics, he also took up ‘green’ causes. Carpenter’s campaigns for smoke abatement have rarely been revisited. His serialised essay on the subject, The Smoke-Dragon and How to Destroy it, first appeared in The Clarion in 1894, but has never been republished until now.

Smoke pollution from burning coal was endemic in 19th century cities. Smog not only provided the ‘London particular’ for the evocative Victorian melodramas of Charles Dickens and Robert Louis Stevenson but also caused thousands of premature fatalities in real life. It was a mass killer that blighted the lives of entire urban communities in Carpenter’s own Sheffield and throughout centres of industry, right up to its tragic culmination in the notorious Great London Smog of 1952.

Here The Smoke-Dragon is accompanied by Stephen E. Hunt’s new essay on this unexplored area of Carpenter’s work. He finds that Carpenter can be credited with renewing the issue of smoke abatement in public debate during the late 19th century, and that the topic is of a piece with his broader thinking about social justice, class and health inequalities.

There have significant improvements in air quality due to reduced coal burning in the West since the Second World War. Nevertheless, in the present day, the World Health Organisation still considers air pollution to be ‘the world’s largest single environmental health risk’. The increase in petrochemical smog caused by sources such as vehicle emissions ensures that outdoor air pollution continues to exact a catastrophic death toll in the world’s megacities. Even in Bristol, a so-called ‘Green Capital’, it is estimated that each year around 200 early deaths can be attributed to poor air quality. 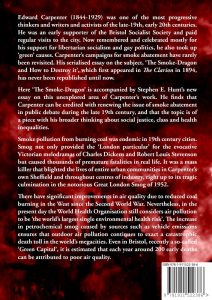