Over the last year or so we have been bombarded with allegations and cases of sexual abuse involving Radio DJ’s, TV producers, Comedians, TV personalities and pop stars who were all at their height of fame in the 1970s. Amongst the alleged perpetrators were Dave Lee Travis, Jimmy Savile, Rolf Harris, Stewart Hall, Garry Glitter, Freddie Starr, Jim Davidson, Max Clifford and Jimmy Tarbuck. Nearly 600 victims of sexual abuse have come forward as part of the Operation Yew Tree investigation[1], which was originally aimed at investigating Savile, is on-going and still turning up victims and alleged abusers.

The media have been talking of ‘cultures of abuse’ which survived in major media institutions such as TV and Record companies for decades, others on the right have muttered about the ‘promiscuity’ of the 60s generation as the reason this happened. To a certain extent this latter view although missing the point has some resonance in feminist critiques of the supposed 60s ‘sexual liberation’. Briefly put, this argument proposes that this was a one-sided ‘liberation’ for men, in that women were expected to be promiscuous and were branded ‘frigid’ if they did not accede to men’s demands for sex. This compulsion was veiled by terms such as ‘free love’, being ‘groovy’, ‘expressing yourself’, rebellion against ‘straight’ society and hastening the end of the ‘sexually repressive society’.

If this was a ‘culture’ based on coercion then it has appears to have some resonance with the relationship between some 70s media personalities and their adoring admirers. That is, for many of the Savile generation the explicit, though informal, power relationship with the ‘fans’ was essentially a route to sexual exploitation and abuse. Although a hidden part of the celebrity culture of the 1970s, these behaviours were tacitly accepted by institutions and also by many of those who did not partake in these nefarious activities. It certainly wasn’t taboo within the culture of the period[2].

In December 1976, the Sex Pistols took part in one of the most (in)famous TV interviews[3] ever broadcast, on Today, a London ITV show hosted by Bill Grundy. This event is most commonly remembered by the headline ‘The Filth and the Fury’ in the Daily Mirror[4], which along with all the rest of the hysterical media focussed on the swearing by the Pistols and their entourage. 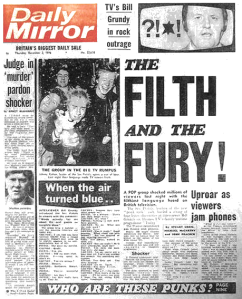 However, retrospective examination of the interview by band members Steve Jones, Glen Matlock and John Lydon, in the illuminating film ‘The Filth and the Fury’[5] exposes to us both the exploitative culture of the TV personality and demonstrated that, if the media had been listening (which they weren’t), the Grundy interview was a significant warning to the younger generation of the systemic corruption of their elder icons. Let’s watch it….

The key moment in the interview, which leads to the Pistol’s celebrated outburst, is when Grundy turns to Siouxsie Sioux:

GRUNDY (Turning to those standing behind the band) What about you girls behind?

GRUNDY Are you, er…

MATLOCK Or your granddad.

GRUNDY (To Sioux) Are you worried, or are you just enjoying yourself?

GRUNDY Ah, that’s what I thought you were doing.

SIOUX I always wanted to meet you.

GRUNDY Did you really?

GRUNDY We’ll meet afterwards, shall we? (Sioux does a camp pout)

The 70s TV celebrity and so-called ‘fan’ relationship is explicit here, with Grundy’s last remark expressing implicit sexual innuendo, which in retrospect is far more than just an allusion. The abusive culture was so in-grained that Grundy assumed that because Sioux wanted to meet him she must also want to sleep with him, as any fan would of course! Sioux’s immediate disdainful expression and Jones’s empathetic and then angry responses are an explicit recognition and rejection of this culture. After all it was part of punk practice to pull respected cultural figures off their pedestals and Jones bought him crashing down to the level of, in Lydon’s words, ‘a drunk in a pub’:

JONES You dirty fucker! (Laughter from the group)

GRUNDY What a clever boy!

JONES What a fucking rotter.

As Jones infers in the film, Grundy was just a drunken sexist old git. But as the nervous Pistols realised during the media outrage after they had ‘topped him’, he was a socially powerful drunken sexist old git, despite his and the programmes eventual fall from grace[6]. However, they were probably not aware that he was merely the ‘tip of the iceberg’ of sexual exploitation within the business.

In this controversial moment the Pistols exposed the degenerate and exploitative media culture of the 70s which has shocked us so much over the last couple of years. The irony of course is the media of the time (and even now) completely ignored this aspect, because for them there was no problem, it was acceptable. Instead the journalists and editors rounded on the ‘disgusting’ and ‘depraved’ Sex Pistols for their ‘shocking’ profanity, missing perhaps one of the great forewarnings of a generation.

Looking on the bright side, in the words of the TV Personalities, ‘Where’s Bill Grundy Now?’ and for that matter Jimmy Savile and the rest of these wankers….