The National Health Service founded in 1948 was inspired by a self-help system which Aneurin Bevan had participated in as a young man. After working as a coal miner in South Wales, he served on the hospital committee of the Tredegar Medical Aid Society which ran hospitals and convalescent homes for miners as well as employing family doctors and even providing benefits for the dependants of the members.

Later as a Labour MP for Ebbw Vale he took up the idea which was familiar to him and, as Minister of Health and Housing in the 1946 Labour Government, he transformed it into a state-run service on a co-ordinated national scale. The institution could concentrate resources and gradually improve the services, growing into a health system often described as ‘the envy of the world’.

Today, after 65 years of regarding the welfare state as a basic right, we see the top-down public ownership model of the NHS under serious threat of destruction through Thatcherite-inspired privatisation. This represents part of a right-wing economic plan described by Naomi Klein in her book The Shock Doctrine – a process that can only be stopped by the conscious action of the disenfranchised through a mass movement from below.

But where is the participative energy and organized enthusiasm needed to confront this onslaught on the welfare system from the powerful forces which represent the interests of the extremely wealthy?

Recently, fumbling through a box of old postcards at the weekly market in Dorchester, I came across two old black & white photographic postcards of what seemed to be a demonstration in a small rural village. The cards were both captioned ‘Litton Cheney Club Fete 1921’. The pictures showed a large group of men with weathered faces, some in cloth caps, wearing their Sunday best. In one they were marching down a lane. Some carried staves and some were holding what looked like a trade union banner. What was going on? 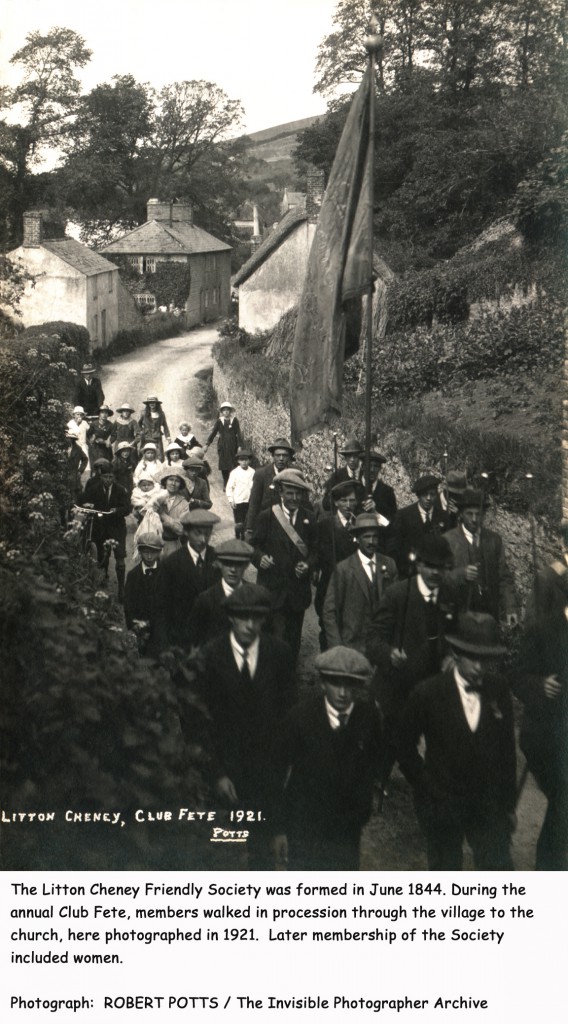 I bought both postcards and took them home, where with the help of a magnifying glass I made out the words ‘Litton Cheney Friendly Society’ on one of the banners. Of course… I remembered that in 1834 in Tolpuddle – not far from Litton Cheney – a group of men had formed themselves into the ‘Friendly Society of Agricultural Laborers’; the rest has become part of official TUC labour history.

So does this mean – as some have told me – that ‘Friendly Societies were the same as trades unions’? There was more to it. I searched online and discovered that the Local History Centre in Dorchester had some of the Litton Cheney Friendly Society’s old records from 1844 to 1948: members’ register and contributions; rules; and accounts. I started with the rulebook, which at first looked like a modern trade union one. But not exactly, for under the heading ‘Objects for which the Society is established’ it stated that:

‘This Society is established to provide, by voluntary subscriptions of the members, with the aid of donations, for the relief or maintenance of the members, during sickness or other infirmity except lunacy. For assistance by contributions towards the funeral expenses of a member or of the deceased wife of a member; for providing medical attendance to members during sickness.’[1]

So in fact it was a kind of mini-NHS: here was a do-it-yourself welfare system.

When I tell people this, some say ‘That’s just another version of the “Big Society”’. No, wait a minute. This wasn’t a forerunner of Cameron’s plan for masking welfare cuts. The ‘Big Society’ that the Tories would dearly love to have is an army of do-gooders who could be called upon to provide services on the cheap and could also be mobilized to strike-break any future public sector disputes. This latter plan was previously instigated just before WWI when the Tories encouraged the creation of the ‘Citizens’ League’ which was used to defeat strikers in Leeds in 1914, and the ‘Middle Class Union’/‘National Citizens’ Union’ which played sinister anti-trade union roles in the post-war years leading up to the 1926 General Strike. No, we certainly don’t want that.

These friendly societies were something different. They were never charities or top-down voluntary organizations intervening in other people’s struggles. They were groups of working people, self-organising out of necessity around their own needs, and applying principles of participatory democracy to do so. The rulebook explains that meetings were held quarterly on the first Monday of January, April, July and October, but that a meeting could also be summoned by the Secretary ‘or by the joint action of any six members’. [2] This placed power with the membership. Has the public in recent times ever had this amount of say in the running of their local council or hospital? 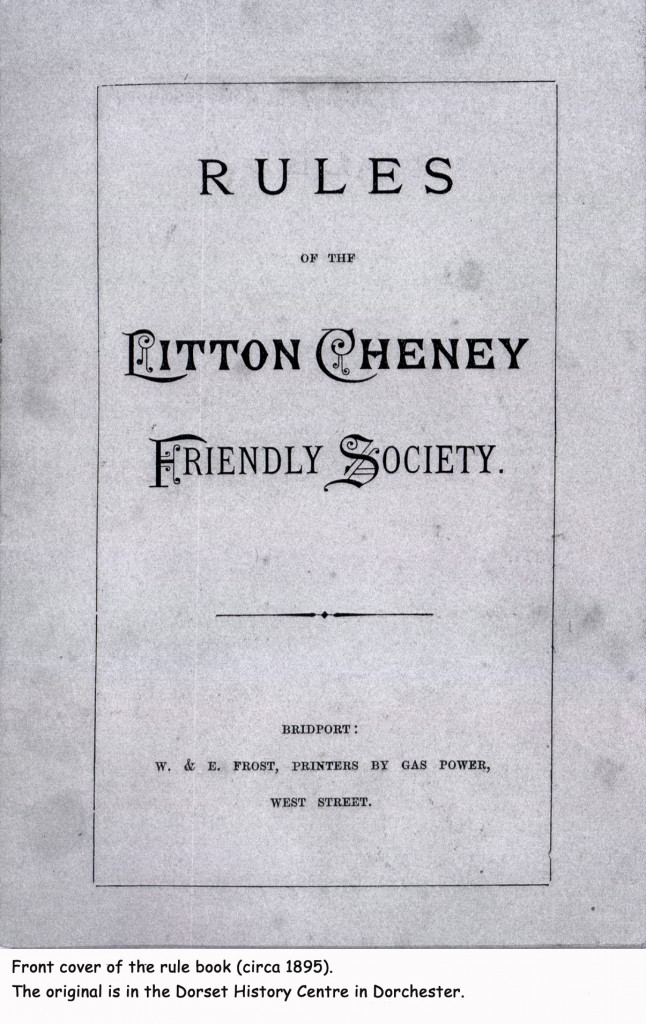 As for flexible accountability, the rulebook describes a committee of management consisting of nine persons including a treasurer, secretary, and two auditors, who continue in office until the AGM ‘unless previously removed by a resolution of the major part of the members present at any meeting called for that purpose.’[3] In other words, the power of instant recall. Additionally, community events were part of the annual calendar, helping to keep the membership involved and active.

In contrast, today we seem to have fallen into a pit of inaction, relying on ‘representative’ rather than ‘participatory‘ democracy. We have come to believe that all we have to do is join a trade union and do nothing but pay our dues (automatically deducted from our wages), until we get into trouble. Then we feel we are entitled to a ‘service’, which we have paid for. A bit like the AA when the car breaks down during a winter blizzard. A full-time officer is expected to come and fight our battles for us, even though there is no active membership on the ground to back him up, and branch participation has dwindled to a small handful of diehards. When faced with the needs of the countless individual cases demanding attention, the officers’ attitudes sometimes become hardened and cynical as they complain about membership ‘apathy’. In contrast the friendly societies were a genuine expression of working people’s direct involvement in organising their own lives.

I was curious whether the societies suffered any interference or influence from the gentry, clergy, or other establishment figures. At the local library (we still have one) in Bridport, I found a book on Litton Cheney and, sure enough, there were a couple of pages on its Friendly Society including a reproduction of the poster for the society’s Fete in 1901. I read that it was presided over by the local church dignitaries and Tory MP Col. R. Williams. So were these friendly societies just leftover relics of rural feudalism?

David Neave in his extensive study of rural friendly societies in Yorkshire 1830 – 1914 found that:

‘Despite the presence of the clergy and gentry at feast days and their obvious concern over the activities of the affiliated orders there is little sign that that they had any real success in imposing their views upon the membership. Minute books of East Riding affiliated branches show that the control of the societies remained firmly with the members. Clergy often gave donations, they were sometimes members, and sometimes they held office but always the decisions were made by the membership.’ [4]

This self-confidence enabled the organisations to avail themselves of church resources and facilities. They used the church for anniversary services, but

‘There was … neither any sign of deference nor religious partisanship in the choice. The church was the traditional place for village meetings and its neutrality and long established secular role made it the most acceptable venue for the bulk of the membership.’ [5]

The details of female membership are harder to assess, but Neave points out that in 1891 over 4m men were in such self-managing societies, i.e. just under half the adult male population. It is hard to explain why this most widespread and representative of working-class institutions has been so overlooked by historians.

Unfortunately the advent of the state-run NHS had the effect of wiping out the last vestiges of the friendly societies and their participatory model. Among the records of the Litton Cheney Friendly Society I found the following historic note: