Poaching is known in some quarters as the 2nd oldest profession.  It’s defined as the taking of wild animals without the landowner’s consent but therein lies a significant problem: how can a landowner own an animal which happens to be present on his land? The Bible states that God provided a commonwealth for all, but landowners feel they have inherited rights, passed down through generations, giving them alone the privilege to hunt game. This was the central argument during the 17th, 18th and 19th Centuries that drove a class war in the British countryside. In some areas it still continues today.

Those who poached, whether they took game for the pot or to sell, were in direct competition with the landowners. Both sides used violence, guile and confederates. Large poaching gangs would come into conflict with small armies of well paid gamekeepers.

Poaching in the South West concentrates on some famous (indeed infamous) cases in this corner of England. It examines the issues behind the ‘poaching wars’ as well as introducing the combatants, their weapons and tactics. It shows how poaching wars split families, divided communities and cost some their lives, though many still felt that the risks were worth it. 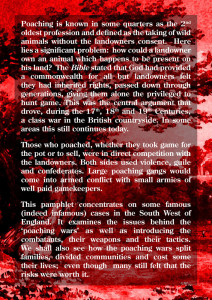