Author: Edward Thompson
Publisher: Past and Present
Edition: No. 50, 1971

Available as a PDF file here.

This paper is famous, so I thought I better read it and I was not disappointed. Thompson is at his cheeky best, starting the article by taking the piss out of anthropologists and their complex analyses of ‘exotic’ cultures whilst the English working class is reduced to disorganised, amoral, sub-humans by historians. Thompson analyses the corn and bread ‘riots’ of the 18th century and not only shows their popular character but also the organised and often successful attempts by the so called ‘mob’ to control prices, quality and distribution of agricultural products. He taunts the naive establishment historians with their crude analyses of the peasantry/working class by outlining how the rioters developed their strategies of resistance to the free market and ‘hoarding’ in the actual Market places of many towns by an understanding of the ‘value chain’ (Market-Mill-Farm), which they physically followed to enforce their demands. Cracking read. (BRHG) 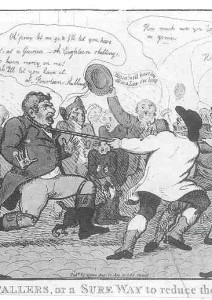