In 2012, radical historians poring over old maps of east Bristol discovered a disused burial ground at Rosemary Green, close to the site of Eastville Workhouse. Over the following years, a team of local researchers revealed that in the nineteenth century more than 4,000 men, women and children from the workhouse had been interred in unmarked graves.

Built in 1847 as a result of the New Poor Law, Eastville Workhouse was the largest in the Bristol area housing over a thousand inmates. 100 Fishponds Road exposes the economic and ideological drivers which determined the nature of the workhouse system, and its unintended consequences. The book reveals what life in the Victorian workhouse was like, who the inmates were and how they were treated. It considers their life chances once they entered the institution and what happened to them after they died.

This third edition brings up to date the story of how Eastville Workhouse Memorial Group named and memorialised the forgotten paupers.

*** If you want books posting outside the UK please email first because to check postal rates. *** 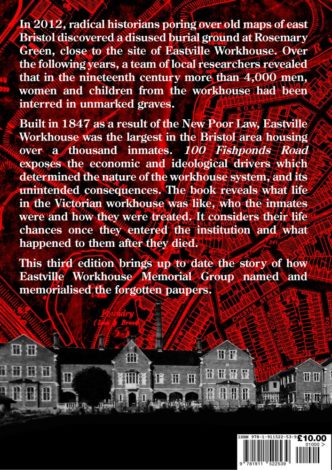