Following on from part one, this pamphlet traces the period of industrial unrest in Bristol between January and August 1890. The lockout of boot and shoe workers that began in December 1889, and continued for the first few weeks of January 1890, provided the opportunity for combining the forces of skilled organised workers with the unskilled and unorganised, in the drive to improve working conditions. It also encouraged forms of social unionism, with links to the wider community. Employers quickly recovered from their initial shock over the first wave of industrial militancy. Part of the settlement of the boot and shoe lockout was the establishment of a permanent Board of Arbitration for the industry. The Bristol Chamber of Commerce took the initiative in sponsoring a local Board of Arbitration and Conciliation, the purpose of which was to take the sting out industrial militancy.

How the Bristol labour movement responded to this initiative and how it handled the differences that surfaced between organisers who advocated separate unions for women, and stressed welfare over militancy, and those who agitated for an alternative model of unionism open to women and men, are some of the key issues addressed. Despite their strenuous efforts in organising tailoresses in the Bristol area, the difficulties they encountered, and the defeat suffered in a second strike at John Lysaght’s galvanising plant, sowed seeds of doubt in the minds of labour organisers. This may explain why new and old trade unionists were drawn into arbitration and conciliation as a way in which to resolve disputes and establish or maintain a union presence.

While the fervent hopes of the Bristol socialists aroused by the 1889-90 strike wave were not to be realised, Bristol’s working class had appeared on the political, economic and social agenda as a force not to be ignored. 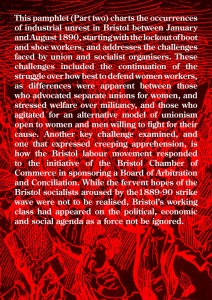