If you walk down Market Street in St. John’s, the capital of Antigua and Barbuda, you will come across a grand stone building that was once the court house and now known as the Old Court House.  It was built in 1747 on the site of the first city market, and to its pride is the oldest building still in use in the city. The Old Court House was designed by prominent English-born architect, Peter Harrison and financed by a tax levied on Antigua’s slave owners. It has become the perfect home for the national museum communicating the fascinating history of two islands, Antigua and Barbuda.

The museum was opened in 1985 and is operated by the Historical & Archaeological Society, a private non-profit organisation. The curator is Michele Henry who warmly welcomed me (Rosemary) during a morning visit in February 2019. I was delivering three Bristol Radical History Group booklets to be donated to the museum’s archive and research room which is located upstairs. The books will be digitised and available for students and historians.[i]

The museum houses a fine collection of Amerindian (mainly Arawak) artefacts including a spectacular canoe carved from a single huge tree. These boats could carry up to 80 people, very impressive indeed! As a visitor I was intrigued to learn of the lives of the indigenous people who inhabited the Caribbean islands before they were invaded and settled by Europeans.

Art along with cultural heritage and exhibiting a difficult history are a balancing act for such museums. Antigua is almost wholly reliant on tourism for its income.[ii] Many people visit on cruise ships, a vast neo-colonial invasion on a daily mission to shop, eat and drink in St John’s. Other tourists are flown in daily on large aeroplanes, mainly from the U.K., Canada and the USA and on the whole stay on the islands pristine beaches, usually in foreign owned hotels. A small number of the visitors are interested in the cultural heritage of the island and will visit the museum, thereby making it a tourist attraction. However, the national museum’s primary responsibly is as an educational establishment for the citizens of Antigua and Barbuda, to correctly interpret their history and national identity, which in part is a harrowing one of slavery and exploitation. On the day I visited the museum it was well attended by tourists. The Historical Society of Antigua and Barbuda operate a well-established educational program for school children; often incorporating field trips to the various historical sites located on the island. The museum also has an informative Facebook page which is frequently updated showcasing their educational program and archaeological research. 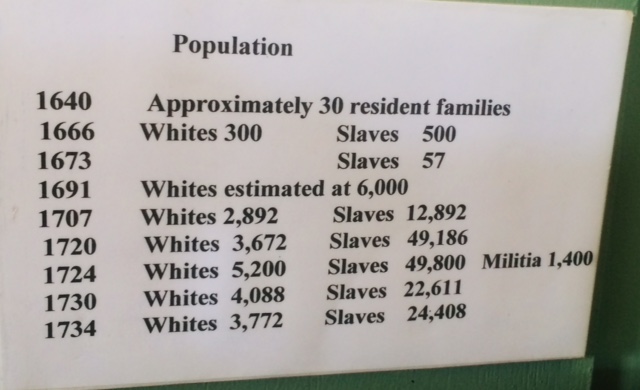 Historical interpretation for the museum is based upon simply displaying primary sources:  paintings, drawings of life on the plantations, lists of the enslaved, plantation accounts,  examples of punishments, along with financial accounts obtained from slave markets. The viewer is able to absorb the dark history of slavery and is left in no doubt of the nation’s pride in celebrating heroes such as Prince Klaas who led a slave rebellion against the British occupiers in 1736. Incidentally, this mode of interpretation is one employed in the many holocaust museums in the USA and across Europe. Artefacts, journals and legal documents, lists, valuables obtained and the sheer impact of inhumanity upon women, men and children is both shocking to the senses, but also educational to those in doubt. It is a form of dark tourism at its rawest, but at the same time appealing to visitors, including children from across the world. The most disturbing images are displayed at adult head height, so that young children will not see them, whilst other artefacts, such as the chains used on the enslaved are displayed on low tables so visitors are free to ask questions about the display. Equally as impressive are the outside exhibits including steam trains that were used on the sugar plantations and shipped over from England, demonstrating the reach of the industrial revolution across the Atlantic.

The museum states that:

collecting is central to the mission of the Museum. It acquires objects and specimens by field collecting, gifts, loans, and exchanges and welcomes input from all those who are interested in preserving and expressing the island’s heritage. Other objectives are education and research of the nation’s heritage. It presents to visitors an overview of the island’s history and natural history. There is a fine reference library and there are many computer databases totalling 25,000 records, available for quick reference.

Increasingly, in tourism dependant islands, museum curators are expected to contribute to the development of the visitor experience that emanates from dark events and this can pose difficulties around objectivity and ideological content. This can be problematic, the construction of the history can be biased by contemporary elites towards attracting and not ‘upsetting’ the target group, in this case tourists. This small island museum has not fallen into this trap. I felt very much, whilst walking around the exhibits, that I was viewing authentic cultural history without inappropriate biases, especially concerning the history of treatment of the enslaved on the plantations, the emancipation of enslaved, the formation of labour unions, cricketing heroes and ultimately independence. The interpretation of the impact upon human beings in connection to the legacy of the slave trade was pivotal to the museum’s success. Collective memory is central to how we shape our past and the way we remember defines all of us in the present.

Rosemary hopes that by meeting Michele Henry and donating a few of our books we can open the door further between our group and the museum’s historians to forge a lasting research link between Antigua and Barbuda and Bristol through the connection of Bristol’s legacy in the African slave trade and other cultural links.

BRHG member Mark Steeds and his wife Fiona also visited Antigua, just over a year before Rosemary, with Fiona wanting a nice relaxing holiday and Mark keen on studying the island’s commemorations of the victims of the slave trade and its links with Bristol. The opportunity for their visit came after British Airways had slashed their prices to the Caribbean, in the aftermath of Hurricane Irma, when many people thought that the whole area had been affected with severe damage. This wasn’t so, although the hurricane which struck in September 2017 (with its 185 mph winds) had narrowly missed Antigua, it devastated the nearby island of Barbuda. In the ensuing ‘Land Grab’ over the flattened island, would-be investor Robert de Niro was being charged with exploitation – but that’s another story. We had nearly a week on the island and were able to explore most parts, including the former Codrington plantation at Betty’s Hope, the Devil’s Bridge on the eastern coast of Antigua (allegedly a location for mass suicides by the enslaved working on nearby plantations), the museum in St John’s and the Prince Klaas memorial on the capital’s outskirts.

We stayed at English Harbour in the south of the island, part of Nelson’s Dockyard National Park, itself a UNESCO World Heritage Site which includes Clarence House and Shirley Heights. We had a huge stroke of luck as the island’s leading historian and archaeologist, Dr Reg Murphy, was based here. With an introduction from the good people at the museum, I was actually able to meet him and talk about his life and his team’s many achievements, while grilling him about Antigua’s history. It was while working as a builder with his father, who had a huge interest in local history, and coming across countless ‘finds’ that Reg was inspired to take the hard road to become a bona fide archaeologist himself. One of the first major digs that he undertook was in fact the Betty’s Hope plantation and it is now a tourist attraction with its own visitor centre cum museum. The island had first been settled by the English in 1650 and the Codrington family acquired the estate in 1674 and ran it as a sugar plantation right up until 1944. The Codringtons were a West Country family who also owned Dodington House in South Gloucestershire – now owned by multi-millionaire vacuum cleaner salesman Sir James Dyson.

One of the first questions I asked Reg was about the rumours concerning the Codrington’s and forced breeding programmes for the enslaved. Due to low birth rates, pro-slavery MP Christopher Bethell Codrington courted controversy in the early 1800s by suggesting Barbuda would make a “fine Nursery for Negroes”. Reg felt that the jury was out on this as there wasn’t any firm documentary evidence either way. I also asked him about the legend of the Devil’s Bridge. Again Reg stated that as yet there wasn’t the hard evidence required to confirm the story. I also sought his views on commemoration of slavery on the island and he quite liked the memorial to Prince Klaas but was a bit dismissive of the wooden artwork at the airport, mostly I suspected because it had not been sculpted by an Antiguan. His brief in Nelson’s Dockyard included looking after the on site museum that had some great archaeological finds. Another project he was involved with was the restoration of Clarence House, ironically named after one the British monarchy’s most fervent pro-slavery campaigners. The partying sailor prince had lived on the island for a while during Nelson’s time. Reg was very kind giving up his time for me and was good company, with a great insight into politics in the region along with the modern day memorialisation which was going on around and about.

As Rosemary has related, we found the capital St John’s heavily geared up for the tourist trade via cruise ships, a double edged sword if ever there was one, with daily invasions of a few hours for thousands of frantic visitors. Two roads around the museum that tourists encounter have a clear Bristol influence; St Mary Street and Redcliffe Street. Redcliffe Street led to Redcliffe Dock where, local legend has it, the Antiguan slave market was situated. Redcliffe Dock is now a swanky shopping centre renamed ‘Redcliffe Quay’ – and is recipient to the modern day cruise liners. Just on the outskirts of St John’s, on the way to the island’s airport, stands the handsome Prince Klaas memorial in the form of a slightly larger than life sculpture. Antigua’s national hero is depicted blowing a conch shell and summoning his supporters. The slave revolt occurred in 1736 but when plans to massacre the white slave-holders failed, the plotters, including Klaas, skilled millwrights, coppersmiths, sugar boilers, masons, butchers, carpenters etc. were executed with “five broken on the wheel, six gibbeted, 77 burned alive”. Wherever you go in the island you’ll find friendly people and signs of a recent past when cultures collided – Carib, African and European…

Rosemary Caldicott is a member of BRHG, author, researcher, and teacher with a BA in Politics & History (South America and the Caribbean) and an MSc in Sustainable Tourism Development. Has lectured in heritage tourism interpretation, dark history tourism, small island development and national parks.

Mark Steeds is a member of BRHG, Counter-Colston and the Long John Silver Trust. Mark is a former draughtsman and current publican of 25 years, keen on trying to right old wrongs. Interested in all aspects of Bristol’s past, especially it’s maritime and literary history.