This booklet is a short analysis of the role of the Penn family and other early Quakers in the Transatlantic Slave Trade and European expansionism in the North Americas.

As far as I am aware this story, the links between the different generations of the Penn family, has never before been told. It is pertinent to ask, “Why is this so?” The Penn family was at the heart of the English Revolution in the 17th Century and of every important event of British colonial expansionism from the colonisation of Ireland, Jamaica and the East Coast of North America. Yet, especially in Bristol, where the family had such strong connections, citizens are unaware of either the Penn family’s role in shaping the way we live or that their actions created social and class tensions that are still being played out today.

In fact, the Penn family, when it is referred to at all, is portrayed in Bristol as being either brave seafarers (Admiral Sir William Penn is celebrated in Bristol’s St Mary Redcliffe Church) or with kindly, if not saintly, reverence (such as the statue of William Penn in Millennium Square and his introspective Quaker writings that can be found in most, if not all, of the city’s Quaker Meeting Rooms).

What is never mentioned in public is the full story of the Penns, including that: 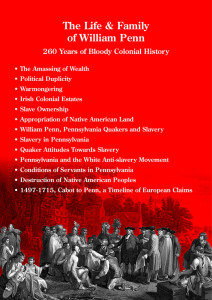