Eighteenth of December 2013 marks the one hundredth anniversary of the commencement of the Bliss Tweed Mill strike in Chipping Norton. The years 1910 to the outbreak of the First World War in 1914 witnessed an upsurge in strike activity in Great Britain and Ireland involving many thousands of workers. By the summer of 1914, strikes, in the coal, cotton, transport, metal, engineering, shipbuilding and building industries, were viewed by the government as a crisis of severe proportions. This article explores one of the lesser-known strikes that took place in the small one–industry market town of Chipping Norton. In November 1913 the Workers’ Union mounted a recruitment campaign enlisting around two–thirds of the workers in the local textile company, Bliss Tweed Mill. However, in the process of the struggle for union recognition three union activists were sacked. On 18 December 1913, 237 woollen textile workers, 125 women and 112 men, stopped work and walked out in an attempt to secure their reinstatement. The stoppage was to last six months.

This pamphlet examines the context, conduct and consequences of this strike. It provides evidence that despite its eventual defeat the strike led to the politicization of some union activists. 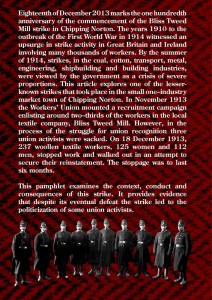