The best book to give a full historical account of Ned Kelley’s life is Ian Jones’s excellent 1995 biography. Jones tells us that Kelly was a heroic man maddened by injustice and driven to become an outlaw as a result of his struggle against oppression. However if you want to find out what it may have really felt like to be Ned Kelley read The True History of the Kelley Gang. Carey succeeds in giving this extraordinary man a voice and makes him achingly real.

His life story is narrated chronologically in the first person and follows the real life story as told by Ian Jones. Carey tackles the story head on and Ned’s voice is the book. It starts with his childhood and the arrest and imprisonment of his father for stealing a heifer in 1865, followed by his apprenticeship to Harry Power, bushranger, and his subsequent tangles with the law. Ned’s violence is never skated over, but it is presented as the inevitable and tragic result of police persecution of poor Irish settlers. It finally ends with the terrible and well-chronicled scene at the Glenrowan hotel in 1880 when the Kelly gang’s plan to derail a train full of policemen is foiled, and Ned in his inhuman armour advances into a hail of bullets until his legs are shot from under him.

Carey uses some tricks of invention. The first is that Ned has written an account of himself for his “daughter” which gives structure to the novel. The second is the love affair with Mary Hearn, who bears him a “daughter”. The third is that Carey enjoys dressing his men up as women, a tradition associated with protest which existed back in Ned’s native Ireland. The fourth is the voice Carey gives to Ned. So read this powerful and well crafted novel and feel the anger. 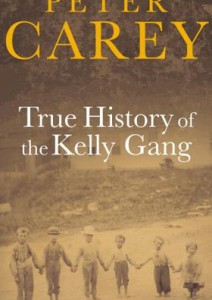