This booklet concerns the life of a working-class Bristolian who, though tireless and outspoken in his early days in addressing the inequalities of society, nevertheless moved more and more towards a position of contempt for both the members of his own trade unions and the working people who voted for him as an MP.

A study of Ben Tillett’s life contains, I think, lessons that will enable readers to deepen their understanding of the historical roots of ‘New Labour’ with its duplicity and jingoistic, ‘little Englander’ mentality as well as the political positions of Trade Union leaders as they seek to limit public debate, analysis of the current recession and alternative political strategies with the very class of people they supposedly represent.

The co-ordinated actions by Victorian and Edwardian employers to combat the rise of ‘new unionism’ epitomised by Ben Tillett involved all branches of the State (police, army, civil servants) as well as politicians at local and national level. Tillett’s life story shows how the State also relies on leaders of labour to head off independent working class movements that threaten private ownership. The miners’ strike and the Wapping dispute of the 1980’s are more recent examples of such tactics and all add to the historical proof of what really lies behind the smiling mask of ‘Caring Capitalism’.

Finally, it is curious how continual Bristol Authorities remain silent of many of its significant historical figures – figures who shaped the way we live and think today. Certainly the people of Bristol should be made more aware of the remarkable achievements and political failures of their native son, Ben Tillett. Perhaps this booklet will stimulate others to produce a more in-depth publication which will take the political analysis of Tillett’s life a little further and a little deeper. 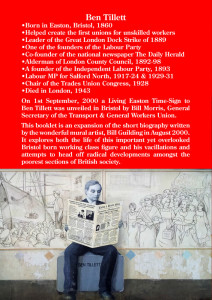