America’s entry into World War II immediately served to highlight the issue of race relations and the contradictions between America’s declared position as a defender of “freedom” and “democracy,” and what was actually practiced. Prior to the D-Day landings of June 1944, there were just under 1.6 million American forces personnel located in various parts of the U.K, with the largest numbers gathered in the southwest. The pubs in Bristol were segregated with some serving whites only, others, generally poorer ones, blacks only. As early as 1942 arrangements had been made to seat the ‘races’ separately in cinemas in Yeovil and Chard. Even fish and chip shops operated on racial lines or used black Wednesdays and white Thursdays.

Find out about the unrest that happened in Gloucestershire and Bristol when a segregated army made camp there.

Neil Wynn is Professor of 20th Century American History at the University of Gloucestershire. 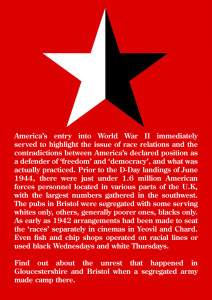