The original copy of this leaflet was in the possion of Jack Cooper from 1917/18 until, following his death, it was found in his sideboard and passed to his grandaughter. It is now preserved, framed behind glass, in the condition in which you see it. Jack (1886-1973) was born in Ebbw Vale where he worked as an engineer in the steel industry from the age of 14 -21yrs. He later went to sea in the merchant marine, working below as 4th Engineer, until he came ashore in 1917 upon marrying. It was following this that Jack received this leaflet whilst working at Avonmouth Docks. It was passed to him by a seafarer friend returning to the ‘Mouth who had been to Mourmansk on a ship possibly involved in the transportation of troops or supplies to the British interventionist forces in Revolutionary Russia. Jack, it appears, would have been an obvious candidate to have approached with the leaflet and to have discussed it with. He was politically active, of a Labour / ILP persuasion, known as a militant trade unionist, and active in the co-operative movement. Jack Cooper continued to work at the ‘Mouth until his retirement around 1951 and lived in Sea Mills from the late 1920’s til 1973.

By G. Tchitcherineand and N. Lenin 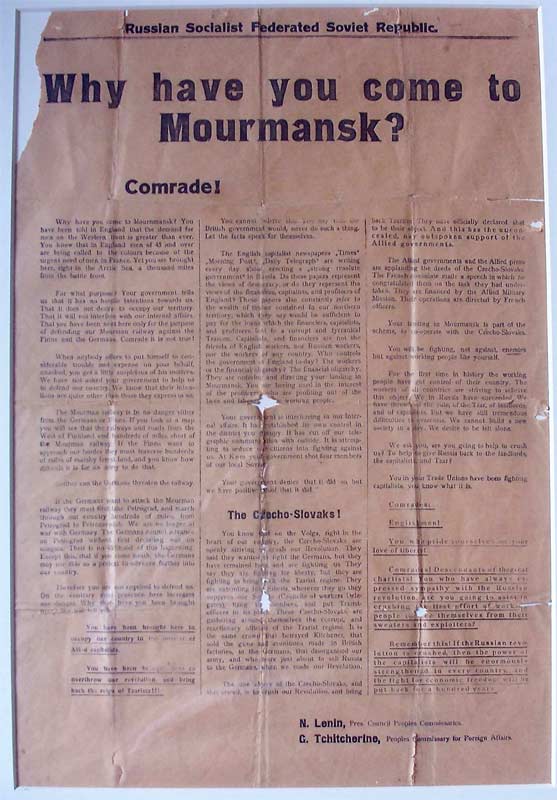 Why have you come to Mourmansk?

Why have you come to Mourmansk? You have been told in England that the demand for men on the Western front is greater than ever. You know that in England men of 45 and over are being called to colours because of the urgent need in France. Yet you are brought here, right in the Arctic Sea, a thousand miles from the battle front.

For what purpose? Your government tells us that it has no hostile intentions towards us. That it does not desire to occupy our territory. That it will not interfere with our internal affairs. That you have been sent here only for the purpose of defending our Mourman railway against the Finns and the Germans. Comrade it is not true!

When anybody offers to put himself to considerable trouble and expense on your behalf, unasked, you get a little suspicious of his motives. We have not asked your government to help us to defend our country. We know that their intentions are quite other than those they express to us.

Neither can the Germans threaten the railway.

If the Germans want to attack the Mourman railway they must first take Petrograd, and march through our country hundreds of miles, from Petrograd to Petrozavodsk. We are no longer at war with Germany. The Germans cannot advance on Petrograd without first declaring war on us again. There is no likelihood of this happening. Except this, that if you come South, the Germans may use this as a pretext to advance further into our country.

Therefore you are not required to defend us. On the contrary your presence here increases our danger. Why then have you been brought here? We will tell you.

You have been brought here to occupy our country in interest of Allied capitalists.

You have been brought here to overthrow our revolution and bring back the reign of Tzarism!!!

You cannot believe this. You say that the British government would, never do such a thing. Let the facts speak for themselves.

The English capitalist newspapers Times, Morning Post, Daily Telegraph are writing every day about erecting a strong resolute government in Russia. Do these papers represent the views of democracy, or do they represent the views of the financiers, capitalists, and profiteers or England. These papers also constantly refer to the wealth of timber contained in out northern territory, which they say would be sufficient to pay for the loans which the financiers, capitalists and profiteers leant to a corrupt and tyrannical Tzarism. Capitalists, and financiers are not the friends of English workers, nor Russian workers, nor the workers of any country. Who controls the government of England to-day? They workers or the financial oligarchy? The financial oligarchy. They are ordering and directing your landing in Mourmansk. You are beeing used in the interest of the profiteer who are profiting out of the lives and labours of the working people.

Your government is interfering in our internal affairs. It has established its own control in the district you occupy. It has cut off our telegraphic communications with outside. It is attempting to seduce our citizens into fighting against us. At Kem your government shot four members of our local Soviet.

Your government denies that it did so, but we have positive proof that it did.

You know that on the Volga, right in the heart of our country, the Czecho-Slovaks are openly striving to crush our Revolution. They said they wanted to fight the Germans, but they have remained here and are fighting us. They say they are fighting for liberty, but they are fighting to bring back the Tzarist regime. They are extending into Siberia, wherever they go they suppress our Soviets (Councils of workers Delegates), hang our members, and put Tzarist officers in its place. These Czecho-Slovaks are gathering around themselves the corrupt and reactionary officers of the Tzarist regime. It is the same crowd that betrayed Kitchener, that sold guns and munitions made in British factories to the Germans, that disorganised our army, and who where just about to sell Russia to the Germans, when we made our Revolution.

The one object of the Czecho-Slovaks, and this crowd, is to crush our Revolution and bring back Tzarism. They have officially declared that to be their object. And this has the unconcealed, nay outspoken support of the Allied governments.

The Allied governments and the Allied press are applauding the deeds of the Czecho-Slovaks. The French consulate made a speech in which he congratulated them on the task they had undertaken. They are financed by the Allied Military Mission. Their operations are directed by French officers.

Your landing in Mourmansk is part of the scheme, to co-operate with the Czecho-Slovaks.

You will be fighting, not against, enemies but against working people like yourself.

For the first time in history the working people have got control of their country. The workers of all countries are striving to achieve this object. We in Russia have succeeded, we have thrown off the rule of the Tzar, of landlords, and of capitalists. But we have still tremendous difficulties to overcome. We cannot build a new society in a day. We desire to be left alone.

We ask you, are you going to help crush us? To help to give Russia back to the landlords, the capitalists and Tzar?

You in your Trade Unions have been fighting capitalists, you know what it is.

You who pride yourselves on your love of liberty!

Comrades! Descendants of the great chartists! You who have always expressed sympathy with the Russian revolution. Are you going to assist in crushing the first effort of working people to free themselves from their sweaters and exploiters?

Remember this! If the Russian revolution is crushed, then the power of the capitalists will be enormously strengthened  in every country, and fight for economic freedom will be put back a hundred years.

The following text is taken from a pamphlet by Dave Lamb available for free from libcom.org

There is some evidence of fraternisation between Russian revolutionaries and the allied armies sent to put them down, even in the Northern Sector. In December 1918 an occupation of the barracks by Russians of the First Archangel Company, who were sympathetic to the revolution, was supported by fraternising allied troops, who picketed the town so as to shut it off from the barracks. The mutiny was suppressed when Russian NCOs, under British command, mortared the barracks, killing at least one innocent civilian bystander.

In February 1919 men of the Yorkshire Regiment refused to march on Seletskoe. Two sergeants, delegated to express the battalion’s refusal to fight, were arrested, court-martialled and sentenced to be shot. In the light of ‘secret’ orders from the King prohibiting executions after the Armistice, these sentences were later commuted to life imprisonment. News of the Yorkshire’s mutiny spread rapidly through the allied forces. The first to follow suit were the French battalion at Archangel, who refused to return from leave.

Much has been said about the determination of Russian workers to protect the revolution from the Western allies. What has rarely been recorded is how weak the Bolshevik armed forces were. When clashes with the allied Navy occurred, Bolshevik commanders often surrendered immediately. And the few planes the RAF had commandeered easily took command of the air. In one instance an RAF pilot was able to follow a Bolshevik plane to its aerodrome and land there, after shooting it up, before making a safe return. The ultimate Bolshevik military victory was not due to the superiority of Lenin’s forces in the field, but to the decision of the Allies to pull out – a decision largely influenced by the mood of their own soldiers. Major setbacks on the battlefield were largely due to vast numbers of Whites going over to the other side, rather than the superior forces of the Bolshevik armies.

In June 1919, in spite of the fact that the Bolshevik forces on the Dvina were on their knees, the Hampshire Regiment refused contact and withdrew from the battle. To prevent similar acts of indiscipline the ringleaders were sent home for demobilisation. Maintaining discipline, however, proved to be more difficult than it was thought. On July 7 the Slavo-British Legion, which had been at Dvina for only 3 days, mutinied, killing five British officers and four Russian officers. Several mutineers called for volunteers to join the Bolsheviks and some 50 did so, another 50 deserting. Two of the mutineers were captured, tried and shot. The rest of the battalion was disarmed and turned into a labour unit.

The situation in Russia was unique. Here was an army inflicting heavy losses on the Bolshevik forces, breaking through their lines with relative ease, and yet, from the reports of mutinies, it was evident that the whole Archangel force might easily collapse. It is against this background that we can understand the decision to withdraw allied troops from Russia. By September 1919 the evacuation of an army, scarcely damaged by Bolshevik forces, was well under way.