During the 1930s a small group of ultra-nationalistic women, who considered themselves feminists, joined Oswald Mosley’s British Union of Fascists.  Surprisingly some of these women were former high ranking members of the suffragette movement.

Over 50 regional branches of the British Union of Fascists, with Women’s Sections, opened across the United Kingdom. The branches were established to promote and normalise the ultra-right and to position fascism as an acceptable political choice within mainstream political culture.  The branches were also a tactic to give women acceptance within a patriarchal fascist political landscape.  Could it be that these women were being subjugated to promote the alternative agenda of fascism, that being the repression of women?  And, if so, how did this happen, and what were the tensions that arose within Mosley’s ranks?

Lady Blackshirts examines the political and social tensions that confronted women in the 1930s, exploring issues that were so profound that some women were drawn into the world of the fascist political elite, and became ‘militant women citizens’ advocating and endorsing fascism.

… Caldicott’s new pamphlet is a worthy addition to the available historiography, and offers further important detail on fascist policy towards women. 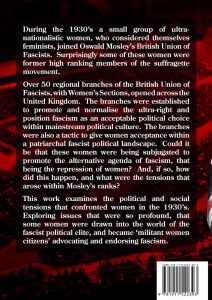