During the year of 1855 rumours of murder and cover up were circulating in the small north Somerset village of Walton-in-Gordano.  An epileptic destitute country girl had died in the local institution known as the Bedminster Union Workhouse.

Her death caused public outrage after letters were written to the local newspapers. The Board of Guardians were suspected of concealing the true magnitude of neglect at the workhouse, leading to accusations of medical negligence.

In this pamphlet, Victorian social attitudes on epilepsy are investigated within the context of how the draconian workhouse system typically caused particular hardship to people who suffered with epilepsy and other mental health issues.

The Life and Death of Hannah Wiltshire illustrates the treatment imposed upon the vulnerable poor living in rural England during the mid-nineteenth century and how a campaign for transparency, accountability and social justice was fought for by the local community.

#35 The Life and Death of Hannah Wiltshire 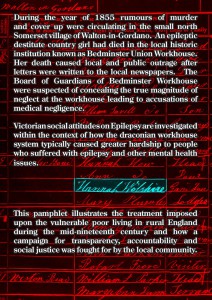