Socialist and feminist novelist Angela Carter is one of the most acclaimed late-twentieth-century English writers, famous for short-story collections such as The Bloody Chamber and novels including Nights at the Circus and Wise Children.

Angela Carter’s ‘Provincial Bohemia’ takes Carter’s life and work in Bristol (1961-1969) and Bath (1973-1976) as a starting point to explore the artistic, radical and experimental communities that flourished at that time. Newly recorded interviews and other primary sources reveal the experiences that may have shaped Carter’s outlook during her formative years as a writer.

Along the way, Stephen E. Hunt looks at the character and impact of the West Country’s counterculture: a journey that takes us through the folk and rock scene, CND and the Vietnam war, the 1968 student occupations, radical media, the women’s liberation movement, the Bath Arts Workshop, performance art, community technology and more.

There are even a couple of Angela Carter jokes…

The 1960s were a key decade in the development of modern Bristol economically and in the built environment. This was also a period in which a burgeoning counterculture emerged, much of it from the dilapidated low-rent houses of Clifton.

Folk music, CND and anti-Vietnam war campaigns, student activism, feminism, anarchism and art all fed into a “scene” which was one of the most vibrant in the country outside of London.

In the middle of all this was feminist, socialist and folk music enthusiast Angela Carter, who founded a successful literary career whilst living, studying and working in Bristol.

Author Stephen Hunt’s book takes a detailed look at what Carter herself called a “provincial Bohemia” as seen through her own experiences and friendships while living in Bristol in the 1960s, and in Bath in the early 1970s.

This is a valuable addition to the growing body of scholarship around one of the most important British writers of the 20th century, but will also be of huge interest locally as a rich and detailed portrait of a long neglected aspect of Bristol’s recent past which laid some of the foundations of the city’s modern “brand” which is now eagerly promoted by officialdom and hipsters alike.

Hunt’s researches and his interviews with people who were around at the time take us into some fascinating (and sometimes downright strange) corners of a Bristol which, though battered by war, was a place where, for some creative and enterprising souls, anything seemed possible.

Read the full article in the Bristol Post here. There is also an article in Bristol 24/7 here.

Hunt has gathered together a who’s who of bohemian Clifton with anecdotes that vividly recreate the beatnik scene which largely revolved around politics, poetry, art, music and mind altering substances. A readable and wide reaching book; as much an analysis of Bristol’s counterculture as a study of Angela Carter. 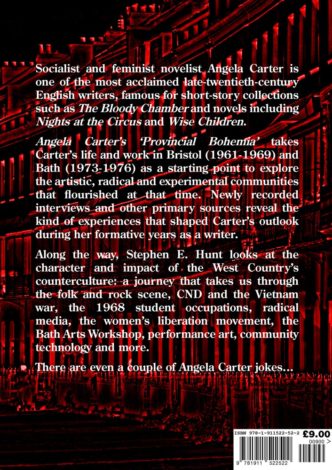