The Suffragettes are widely seen as the pinnacle of Women’s radical action in the early Twentieth Century. However, beyond the passion and drive of such unladylike militancy, were the organisation and aims of this movement as radical as the means used to try to obtain it? Were the Suffragettes alone in the struggle for female emancipation? And how far can the granting of limited female suffrage in 1918 be attributed to the exploits of these women?

This pamphlet analyses this iconic ‘women’s’ movement and question how far it can really be seen as part of Radical History.

The 2nd Edition now has pictures! 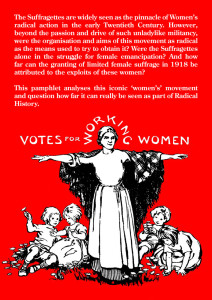