This is a hugely ambitious book, setting out to provide an integration of the work of both archaeologists and of anthropologists. The extent of their ambition is spelt out on page 24 “we will not only be presenting a new history of humankind, but inviting the reader into a new science of history, one that restores our ancestors to their full humanity.”

I accepted that invitation but confess that I sometimes found it hard going, as demanding an intellectual workout as some choose to subject themselves to physically in a gym! What made is easier to cope with was the book’s sometimes vivid metaphors (in a discussion on property we are asked to imagine Kim Kardashian walking down a street in Paris wearing a diamond necklace) and the frequent side swipes at authorities like Levi Strauss, Jared Diamond and Steven Pinker (the latter especially targeted for his assumption of an exclusive heritage of a European civilising process).

Throughout the authors point out that “the concept of ‘civilisation’ is still largely reserved for societies whose defining characteristics include high-handed autocrats, imperial conquests and the use of slave labour.”  It is impossible to summarise the complex arguments of a 526 page book but I can identify aspects that will have a special resonance for BRH readers. The authors insist, for example, on going back to the primary source of primary sources e.g. quoting what Jesuit missionaries said (disapprovingly) about the thinking of those they were trying to convert, ignoring the fact that “the indigenous populations of North America were in fact heirs to their own, long intellectual and political history.”

There is no attempt to romanticise the brutal aspects of some of the early societies they describe – Inca victims queuing up to be ritually sacrificed – or to revive the idea of the ‘noble savage’. But the book does identify many examples of collective indigenous governments and highlights those periods of relative freedom and equality which tend to get side-lined in the larger sweep of history. The authors quote Native Americans who had visited France and “think it unaccountable that one man should have more than another, and that the rich should have more respect than the poor. In short, they say, the name of savages, which we bestow upon them, would fit ourselves better, since there is nothing in our actions that bear an appearance of wisdom.” (p52)

Above all the book sets out to challenge conventional evolutionist terminology, based on a notion of a progression from ‘bands’ to ‘tribes’ and ‘chiefdoms’, on to the assertion that there is a clear line of development through the introduction of agriculture, and then on to the growth of cities leading to ‘civilisation’.  There are excitingly challenging parts where the authors are close to arguing the anarchist case – “…complex systems don’t have to be organized top-down, either in the natural or in the social world. That we tend to assume otherwise probably tells us more about ourselves than the people or phenomena that we’re studying.” 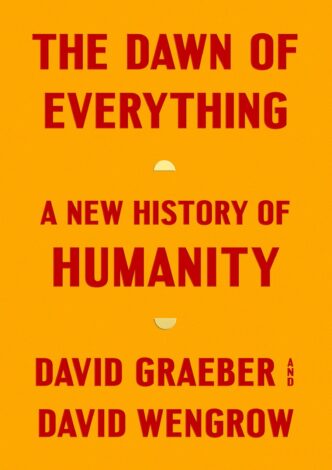