The annual Fete d’Humanitie originally began in 1930 as a fund raiser for the Communist newspaper L’Humanitie. It was the idea of the editor of the paper in Paris and attracted 1,000 people. 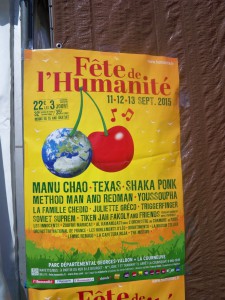 From 1937 foreign stalls were welcomed and it has grown yearly until now it is a huge three day event. This year there were more than 450 stalls, exhibitions, music gigs and sporting events organized by the French Communist Party. They welcomed almost 600,000 people this year and I was one of them!

There are a broad range of visitors interested in this affordable event (22 euros for the 3 days) with its political and philosophical debates and international village. The fete is so big it is laid out with appropriately named ‘roads’ such as Avenues Karl Marx, Angela Davis, Woody Guthrie, Che Guevera, Fatima Bedar, Mumia Abu Jamal and many more heroes of the Left. The fete has a wonderful feel and there was great excitement and comradeship when the result of the Labour leadership was announced.

This year headline acts included TEXAS and MANU CHAU… there was the Orchestra de chambre de Paris, Youssoupha, the jazz stage, French rappers – something for everyone’s taste. There was Bristol’s own Red Notes Socialist Choir singing alongside the Chorale de Paris and at other stalls too. One of my favourite memories of the weekend was Red Notes singing ‘The Internationale’, ‘We Shall Overcome’ and ‘Freedom’ on the free bus that runs from the metro. Packed liked sardines, as the Red Notes sang, many passengers on the bus joined in. We were soon holding hands with strangers, which gave me an amazing feeling of comradeship and solidarity.

There were political and philosophical debates, for instance, Yanis Varoufakis, former Greek finance minister was invited by the radical left to discuss Plan B with Jean-Luc Melenchon. I saw some amazing art exhibitions from Mali and there were dozens of book and craft shops and many stalls from former French African colonies – drinks available at the anti-colonial bar, with the Morning Star amongst others and there was food from Iran, food from Morocco as well as the many French regions. From the Young Communists pizza stand there were Karl Marx or Nelson Mandela pizzas! (delicious!)

The French trade unions were well represented as well as a range of European Left groups, youth organizations and climate change too. For those with energy (who had probably drunk the 1 euro water rather than the 1 euro red wine) there was a 10 km run, ice skating and wheelchair basketball. There is a campsite attached to the fete for those who book. I felt it was well worth attending this amazing event as it energizes and ensures we remain connected to others with similar beliefs who challenge the inhuman austerity measures governments are peddling.

While in Paris I took the opportunity to visit Pere Lachaise Cemetery, apparently the world’s most visited graveyard. It is vast with possibly 30,000 graves; many are ostentatious but not all. Most are well looked after, although some are dilapidated. It is non-denominational and I found the graves of Oscar Wilde (covered in lipstick kisses despite the sign!) and Jim Morrison from The Doors as well as one of my favourite singers, Edith Piaf. Other famous inhabitants include Chopin (but without his heart as that went home to Warsaw), Isadora Duncan, Balzac, Proust and Moliere.

The other reason to visit Pere Lachaise was to see the place where in 1871 the last of the Communard insurgents fought a battle against government forces. On that May morning all 147 survivors were lined up against the brick wall, shot and then buried in a mass grave.

The Paris Commune was the first successful worker’s revolution and was in existence from March to May 1871, elected by the citizens of Paris and included the first workers International. The uprising followed the collapse of Napoleon III’s second empire and France’s defeat in the Franco-German war. The Commune declared that the highest salary could not exceed 6,000 francs and decreed the separation of the Church from the State and support for a ten hour working day.

I found it impossible not to be emotional at the site of the bullet holes still in the wall where comrades were slaughtered. I also felt numb when I saw the memorials to the victims of Nazi rule during WWII.

Pere Lachaise was an amazing place with memorials to a range of groups and well worth the visit. It has inspired me to research events I know too little about.

12,500 French people were deported, 10,000 were exterminated.
The 186 steps of the quarry’s stairs were the ordeal of those who had to climb them up, lifting heavy stones under the SS beatings.
This monument perpetuates their memory and their fight for French independence. Let us remember.