A Review of ‘Witness Against the Beast: William Blake and the Moral Law’ by E.P.Thompson

‘Rouze up O Young Men of the New Age! set your foreheads against the ignorant Hirelings! we have Hirelings in the Camp. the Court. & the University: who would if they could, for ever depress Mental & prolong Corporeal War’

Watching the Olympic opening ceremony the other night I noticed that the hymn Jerusalem so beloved of public schools, posh rugby crowds and Tory idiots may finally be being half-understood in a public context because of a connection to the ‘Industrial Revolution’. I disliked this hymn as a youngster as to me it signified nationalism, privilege and sacrifice for war. I think I was right about its representation but wrong about its real content.

Here is the poem (and the original document):

And did those feet in ancient time.
Walk upon Englands mountains green:
And was the holy Lamb of God,
On Englands pleasant pastures seen!

And did the Countenance Divine,
Shine forth upon our clouded hills?
And was Jerusalem builded here,
Among these dark Satanic Mills?

I will not cease from Mental Fight,
Nor shall my Sword sleep in my hand:
Till we have built Jerusalem,
In England’s green & pleasant Land [3] 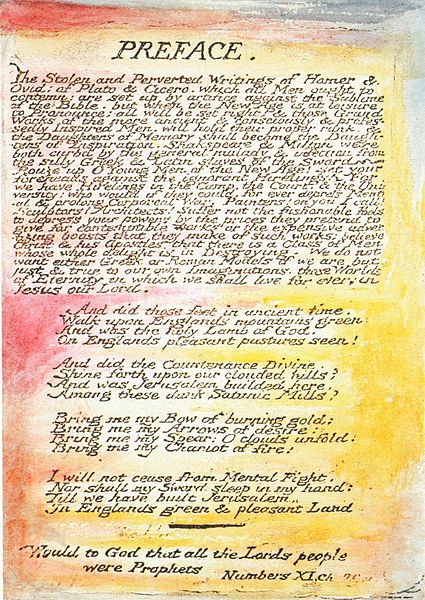 Having just read the excellent ‘Witness Against the Beast: William Blake and the Moral Law’, E.P.Thompson’s last book, I feel armed with both historical and political knowledge about William Blake as well as a good feel in this context for what he was getting at in his poems and writings. And boy was he pissed off! How these posh nationalist bastards have turned this poem round is a lesson in the effectiveness of a fusion of plagiarism and British ruling class propaganda. The poem was turned into a song during the miserable depths of the 1st World War. As Wiki states:

The poem, which was little known during the century which followed its writing, was included in the patriotic anthology of verse The Spirit of Man, edited by Great Britain’s Poet Laureate, Robert Bridges, and published in 1916, at a time when morale had begun to decline because of the high number of casualties in World War I and the perception that there was no end in sight.

Under these circumstances, Bridges, finding the poem an appropriate hymn text to “brace the spirit of the nation [to] accept with cheerfulnes all the sacrifices necessary,” asked Sir Hubert Parry to put it to music for a Fight for Right campaign meeting in London’s Queen’s Hall. (The aims of this organisation were “to brace the spirit of the nation, that the people of Great Britain, knowing that they are fighting for the best interests of humanity, may refuse any temptation, however insidious, to conclude a premature peace, and may accept with cheerfulness all the sacrifices necessary to bring the war to a satisfactory conclusion).[4]

Hence the hymn’s association with those ruling class Donkeys who were willing to sacrifice millions of working class Lions on the battlefields of Europe, Africa and the Middle East for the defence of their wealth and Empire.

So what was Blake getting at when he published this poem in 1808? Well it is effectively split into two parts; a cynical, ironic and sarcastic first two verses asking the reader a series of questions about whether they believe Jerusalem had been created in the past or was currently present in England. Check out all those question marks. I don’t think Blake is in the affirmative to say the least! The second two verses are a statement of Blake’s absolute commitment to massive social revolutionary change (no question marks here) or as Thompson put it in reference to Blake’s poem ‘London’:

‘There must be some utopian leap, some human rebirth, from Mystery to renewed imaginative life. ‘London’ must still be made over anew as the New Jerusalem’[5]

Blake was not only a sophisticated religious non-conformist and leveller but a staunch supporter of the French revolutionary model for change. Despite being unable to write or speak freely in Britain during the repression of Republicans and supporters of Tom Paine in the 1790s after the French revolution, Blake was able to couch his revolutionary views in more esoteric forms which generally escaped the censors and Government spies. However, in 1803 Blake was charged at Chichester with high treason for having ‘uttered seditious and treasonable expressions’, but was eventually acquitted[6]. So Blake was no ivory tower poet or simpering patriot, but actively trying to bring the downfall of the British Babylon. It is amazing that his words could be so misrepresented and so effectively recuperated by his enemies in the hymn ‘Jerusalem’. In fact if he was alive he would be railing against this and I am sure he has turned so many times in his grave the cemetery has been shaking[7].

Another facet of the misrepresentation of his work by establishment historians and commentators that E.P.Thompson rounds on in Witness Against the Beast is the attempt to convert his socially realist works into neutral descriptions of the ‘human condition’. For example, Blake understood the ‘fallen’ (the working class of London) to ‘lie within the empire of property, self-interest, State religion and Mystery’[8]. As he stated in his poem ‘The Human Abstract’:

Many descriptions of the ‘horrors’ of London (arguably the most wealthy and powerful city in the world) in the 18th and 19th Centuries, are reduced by bourgeois commentators to tragic spectacles but ultimately understood as a ‘natural’ state of affairs which has nothing to do with their economic and political systems. This is how Blake has been read. However as Thompson points out in analysing Blake’s poem ‘London’:

‘Blake’s ‘London’ is not seen from without as spectacle. It is seen, or suffered, from within, by a Londoner. And what is unusual about this image of the-human-condition-as-hell is that it offers the city as a unitary experience and not as a theatre of discrete episodes. For this to be so there must be an ulterior symbolic organisation behind the literal organisation….The tone of compassion falls upon those who are in hell, the sufferers; but the tone of indignation falls upon the institutions of repression – mind-forg’d manacles, blackning Church, Palace, Marriage hearse. And the symbolic organisation is within the clearly conceived and developing logic of market relations. Blake does not only list symptoms: within the developing imagery which unites the poem he also discloses their cause…he never loses hold of the image of buying and selling…What are bought and sold in ‘London’ are not only goods and services but human values, affections and vitalities’.

‘In a series of literal, unified images of great power Blake compresses an indictment of the acquisitive ethic, endorsed by the institutions of the state, which divides man from man, brings him into mental and moral bondage, destroys the sources of joy and brings, as its consequence, blindness and death’[10]

Maybe not so appropriate for the Olympics opening ceremony?

The brilliance of Thompson’s book is to rescue Blake and his works from the condescension of establishment historians by uncovering, in detail, the non-conformist religious context and dynamic of his political and social views in a period of state repression. In an astounding section of the work, Thompson recounts tracking down the last remaining Muggletonian in 1975, a non-conformist religious sect which began in 1651, another of the ‘plague of locusts’ that energised the revolutionary fervour of the English Civil War. The Muggletonians as Wiki states:

‘grew out of the Ranters and in opposition to the Quakers. Muggletonian beliefs include a hostility to philosophical reason, a scriptural understanding of how the universe works and a belief that God appeared directly on Earth as Christ Jesus. A consequential belief is that God takes no notice of everyday events on Earth and will not generally intervene until it is meant to bring the world to an end. Muggletonians avoided all forms of worship or preaching, and met only for discussion and socializing. The movement was egalitarian, apolitical and pacifist, and resolutely avoided evangelism‘[11]

In researching the underground non-conformist currents such as the Muggletonians that were present in London in Blake’s time, Thompson is able to unravel the basis for his revolutionary beliefs and, crucially, how they developed. He is also able to understand Blake’s convergence (and divergence) with the enlightenment revolutionary republican views of Tom Paine and the Jacobins. This truly is a great book both in its depth and objective of rescuing Blake from revisionists.

Let us hope that in a hundred years the rich bastards have not got us all singing the following as we trudge off to another of their wars….

God save the queen
We mean it, man
We love our queen
God saves[12]