Reclaim The Streets was a prominent 1990’s network of collectives that organised mass street parties to transform the urban environment.  RTS initially emerged from the road protest movement and sought to liberate spaces from car culture. Large anti-capitalist mobilisations included the takeover of London’s M41 Motorway in 1994, the J18 Carnival Against Capitalism of 1999 and May Day 2000, which saw maypole dancing and guerrilla gardening on Parliament Square. Large RTS street parties also took place locally, in Bristol and Bath, and internationally, through countless global actions.

Promotion for Reclaim The Streets: The Film  described it as follows: “A fast, compelling, 80-minute documentary tells the story of RTS with words, images, music and lots of action”. It was made from over a hundred hours of footage from 13 film-makers. The film was later remade as Reclaim The Streets Reloaded but we will screen the rarer original version. 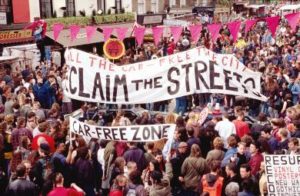