The Anglo – Catholic convert to the left, Hugh Holmes Gore, was a key figure in Bristol’s labour movement during the last two decades of the nineteenth century. Gore linked Clifton Christian Socialists, morally concerned about the poverty and suffering caused by economic depression, with the working class revolutionaries in the Bristol Socialist Society. His eloquence as a speaker moved dockers and miners and attracted working class votes in local elections. He was popular as the ‘people’s solicitor’ and for his committed practical work in the community.

As a radical solicitor he gained a national reputation during the 1893 defence of Walsall anarchists on trial for a bomb plot instigated by a police agent. His personal networks included well known left intellectuals such as the socialist artist and poet, William Morris, the advocate of homosexual freedom, Edward Carpenter, the sexologist Havelock Ellis and his wife Edith, as well as the arts and crafts designer, Charles Robert Ashbee.

However, in 1898 Gore vanished under mysterious circumstances. His friends’ comments suggest a scandal, most probably because of his sexual attraction to men at a time when homosexuality was a criminal offence.

All traces of Gore’s important political contribution subsequently faded. The Enigma of Hugh Holmes Gore: Bristol’s Nineteenth Century Christian Socialist Solicitor documents the range of Gore’s activism and explores the enigma of his disappearance. It also reveals the paradoxes of the man himself. Mike Richardson’s biography uses original sources to reveal a Fabian committed to the formation of a parliamentary labour party who nonetheless defended militant trade unionists, anarchists and revolutionary socialists. Unstinting in the service of Bristol’s working class, warm, enthusiastic and defiant, Gore proved to be an authoritarian democrat who expressed arrogant prejudices. Yet behind the confidant, commanding mask was a complex, often tortured man unable to trust or confide with many of his comrades.

This is the first ever detailed account of Hugh Holmes Gore whose life resonates with the radical history of Bristol and throws new light on Christian Socialism, gay history and of a left within the legal profession. 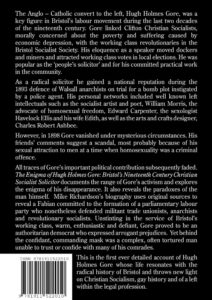