In April 1986 a group of women in Bristol who considered themselves both feminists and survivors of psychiatric treatment came together to found the Bristol Crisis Service for Women (BCSW). Organised as a collective and with scant funding, the group drew on the feminist practice of consciousness raising to develop its work. It also took inspiration from the contemporaneous Survivor Movement, that rejected the medical model of mental illness, condemned the barbarity of much psychiatric treatment and campaigned for mentally ill people to have a much greater say in their treatment.

Like several women-focused charities that emerged at around the same time, Bristol Crisis Service for Women grew out of the Bristol Women and Mental Health Network, founded in the early 1980s. From very early on Bristol Crisis Service for Women was concerned with supporting women and girls who were using self injury to cope with their distress. A number of the founding and early members had lived experience of self injury and some had spent time in locked wards as psychiatric patients.

Told that they were mad or personality disordered, and that their self harming was part of a deviant manipulative strategy that must stop, these women experienced their medical treatment as further trauma and rejected their diagnoses. Instead they began to map out what services they thought might actually help women in their situation – those who had suffered childhood sexual abuse, domestic violence or sexual assault and were struggling under the weight of the trauma.

Bristol Crisis Service for Women was envisaged to be a peer listening service, by women who understood for women who were suffering. In January 1988, therefore, it opened its first helpline from the back of a charity shop on Stapleton Road in Easton. Designed to be open when other services weren’t, the helpline initially took calls from 9pm to 1am on Fridays and Saturdays. It was staffed entirely by volunteers, who supported each other by offering ‘day after counselling’ by phone the morning following each shift.

The fascinating story of this DIY feminist counselling service has recently been the subject of a two year oral history research project funded by the National Lottery Heritage Fund. Called Women Listening to Women: Voices of the Bristol Crisis Service for Women, on 1 March 2022 it launched a website, a podcast series, an 24pp illustrated booklet and two exhibitions called Voices of the Bristol Crisis Service for Women and The Power of Listening. These are currently touring venues in Bristol and will be on display at the Bristol Radical History Festival at M Shed on 14 May. 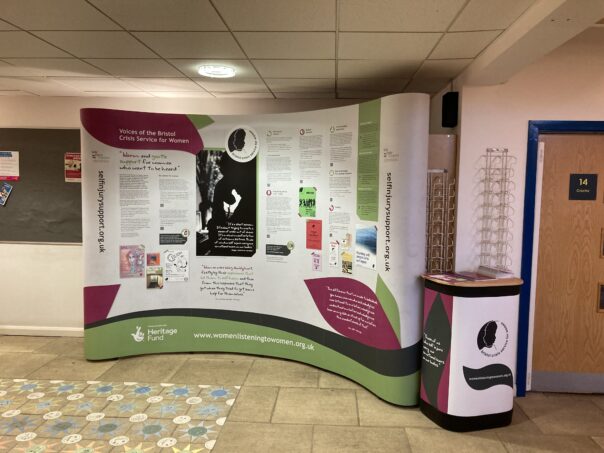 While starting an oral history project in March 2020, two weeks before the Covid 19 pandemic broke, was not ideal, once it became obvious that the massive changes to oral history practice that remote interviewing requires were necessary if anyone was going to get any work done, the Oral History Society produced some excellent video guides on the best kit to use to get an archive quality sound recording over the internet. We settled on using Squadcast podcasting software which was affordable and very simple to use. 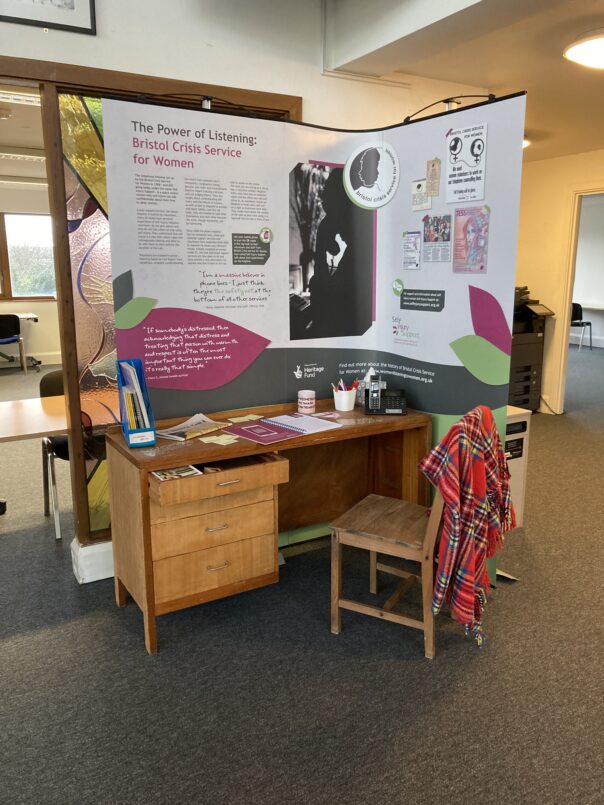 Recruiting and training volunteers remotely turned out to be quite straightforward. It also extended the reach of the project, with women volunteering from as far away as Brighton, although this definitely made the ‘community’ aspect of our community history project harder to achieve. We were also concerned that interviewees would not want to talk about very personal and potentially distressing to a face on a screen rather than a real live person, but actually the remoteness worked the other way, allowing women to feel relaxed in their own home without a stranger intruding in their living room. Interviews were probably shorter than they would otherwise have been, though, with Zoom fatigue typically setting in after an hour or so. After five months we’d recorded and transcribed 22 interviews with former staff and volunteers from the 1980s to the present day and these will be deposited at Bishopsgate Institute as part of a new Bristol Crisis Service for Women and Self Injury Support Collection in April 2022.

Various themes emerged from the interviews. The importance that Bristol Crisis Service for Women was a women-only space because of the strong causal link between experiencing traumatic violence at the hands of men and using self injury as a coping mechanism; the intense impact of the helpline training on the volunteers – many of whom went on to become psychotherapists and counsellors and many others who finally felt safe enough to seek therapy for their own histories of trauma; the extraordinary unwillingness from medical and psychiatric professionals to listen to their patients’ insights into their own behaviour which led many traumatised women being labelled as seriously mentally ill or personality disordered rather than profoundly unhappy. As a newcomer to the history of mental healthcare, I found myself repeatedly double checking dates to confirm that such archaic attitudes and treatments that were being described were not from the 1950s but from the 1990s, 2000s and even, sadly, the present day. The final, depressingly familiar, theme was of the constant struggle for funding that small charities face and the impossibility of long term strategic planning when grants are always attached to short-term project work.

Bristol Crisis Service for Women published research on women and self injury in the 1990s that was considered groundbreaking simply because it was based on the testimony of service users rather than the opinions of psychiatrists.  In the 2000s it targeted communities where self injury was common but hidden such as women in prison, people with learning difficulties and women from ethnic minorities. It created a self help diary, the Rainbow Journal, for girls under 18 and reached out to younger women by expanding its helpline to include text message and email support. In 2010 it won the Queen’s Award for Voluntary Service – the MBE of the charity world. In 2014 it changed its name to Self Injury Support to reflect that it had been a national service for a long time and that many women used self injury as a long term coping strategy, not only in times of crisis.

Bristol Crisis Service for Women, now Self Injury Support, continues to support women and girls via phone, text and email on Tuesdays, Wednesdays and Thursdays. Its support services are still kept going by trained volunteers, now managed by paid staff. Although its management structure has changed – it stopped being a collective in 2002 – Self Injury Support remains the only national helpline for women and girls using self injury 34 years after it originally started in the back room of a charity shop in Easton.

Set up by women who had been at first terrorised in their personal lives and then marginalised and dismissed by the professionals who were claiming to help, Bristol Crisis Service for Women has changed the national dialogue around self injury which is now understood to be primarily a coping strategy for trauma. It is now enshrined in the National Institute for Health and Care Excellence treatment guidelines that “People who have self harmed are cared for with compassion and the same respect and dignity as any service user.” The women who were dismissed as mad and attention seeking but who refused to accept their diagnosis have instead forced society to understand their behaviour from their perspective. It is a shining example of how even the most powerless, marginalised people can effect social change when they work together and never give up.