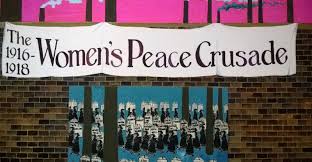 ‘It is up to women to start a crusade for peace!’ Bradford Women’s Humanity League, 1916-18 (Eve Haskins)

Existing research on female war resistance in Britain focuses mainly upon the educated middle-class women who had the time and resources to oppose the war, however the peace seeking efforts of working-class women has been little acknowledged, especially in individual regions. Recent research on the nationwide anti-war organisation the Women’s Peace Crusade has begun to address this research gap, and my study will provide further insight by uncovering the pursuit of peace by ordinary women in a local context. Focusing upon the grass-roots organisation the Bradford Women’s Humanity League, formed in 1916, my study addresses the anti-war protest of working-class women in Bradford, illustrating that the working women of the area reacted in an unequivocally determined way to the war weariness caused by rising casualty lists, conscription and food shortages, and that the radicalism of the area, including strong links to the Independent Labour Party (ILP), contributed to their fervour.

‘Men must fight and women must work’: Women’s Objection to War Work in the First World War (Lucienne Boyce)

In 1915 the Government carried out a census of British men and women to determine the number of men of enlistable age and the number of women available for war work. Known as the “War Census”, it was a prelude to the introduction of conscription of men into the armed forces in 1916. Many men went on to become conscientious objectors; but what of women who objected to offering their services to the war? How could they object, and did any of them in fact do so? Lucienne Boyce will look at women’s response to the call to do war work, and tell the story of Lily Girdlestone, a Bristol “conscientious objector”.