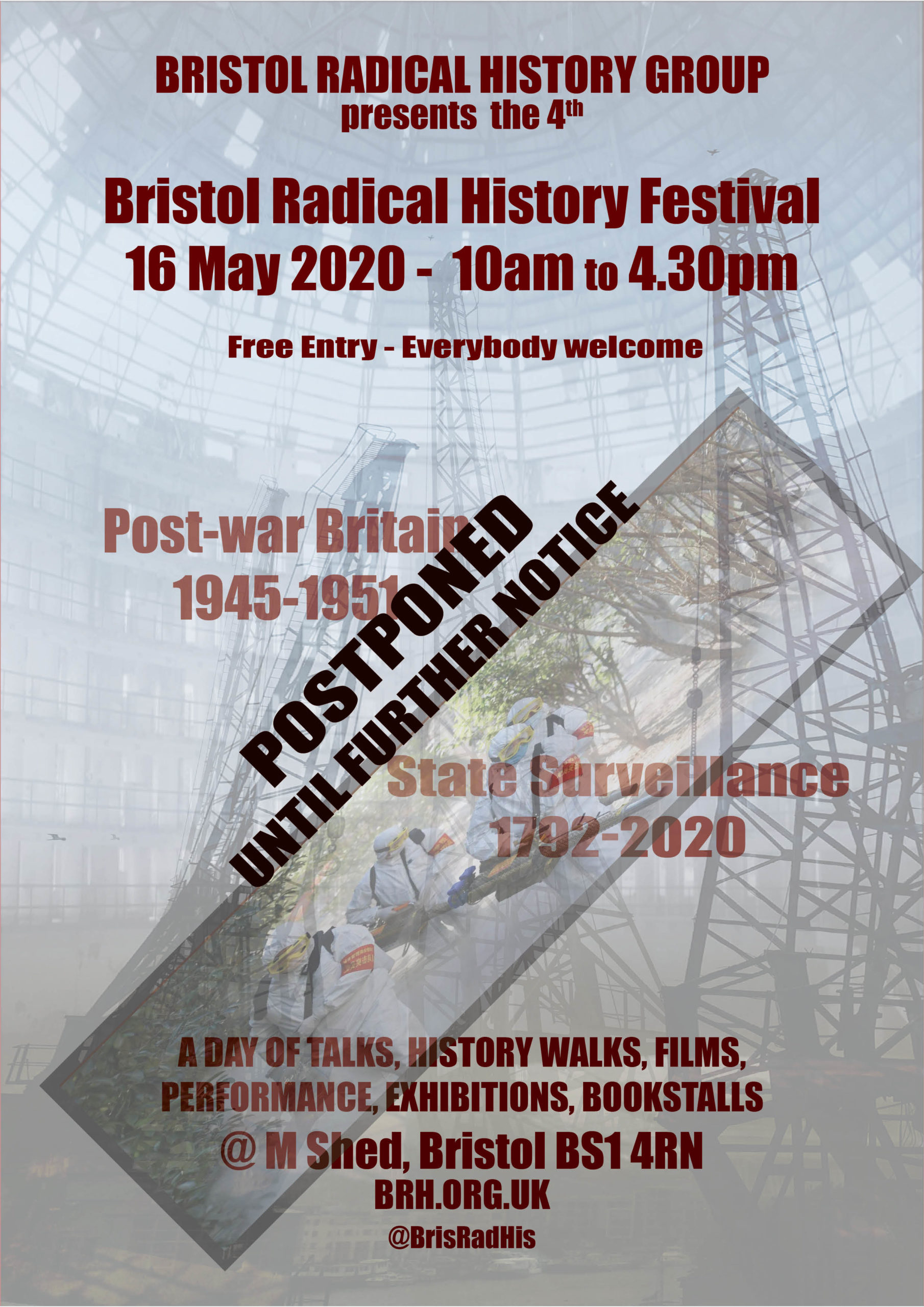 Regrettably, but predictably, we are postponing the fourth Bristol Radical History Festival, originally scheduled for 16th May 2020, due to the coronavirus crisis. In with line with the M Shed and Cube Cinema closure, and for the safely of attendees, we have put the event on hold. We have put together an excellent programme, some details of which can be seen below, and thank all those speakers, performers, stallholders and others who have agreed to contribute. We are not cancelling this event, and fully intend to reschedule when circumstances permit us to do this safely. We are currently have a provisional date of 15 May 2021. We have a back-up date of 18 September 2021. In the meantime, we are planning to schedule some online Bristol Radical History events.

“All the plays and interludes which had been set up, and began to increase among us, were forbid to act: the gaming-tables, public dancing-rooms, and music-houses, which multiplied and began to debauch the manners of the people, were shut up and suppressed; and the jack-puddings, merry-andrews, puppet-shows, rope-dancers, and such-like doings, which had bewitched the poor common people, shut up their shops, finding indeed no trade; for the minds of the people were agitated with other things…”

The 2020 Festival has two main Themes, where once again we will reveal hidden histories, debate and agitate for a future of better pasts:

When environmental campaigners exposed Mark Kennedy as an undercover police officer (or spycop) in October 2010, after a seven-year posting, outrage ensued over the fact he had coerced a number of female activists into relationships, and taken part in criminal actions.

Numerous other spycops were (and are being) exposed after this, forcing the Government to set up the Undercover Policing Inquiry into the activities of its undercover operations through the Special Demonstration Squad (SDS) and the National Public Order Intelligence Unit (NPOIU) since 1968. The cover-up, and whitewash, was underway, utilising multiple arms of the British state. But as we will show in this theme, surveillance activities by both the British state and private/corporate entities have been ongoing for centuries, often working together, hand in glove.

From fears in the aftermath of the French revolution in the 1790s, republicanism and the struggles for democracy to resistance to World War One and the increasing political and economic power of the working class in the 1960s, the British state through spying has attempted to neutralise, suppress and stymie progressive movements and groups. And they didn’t stop yesterday…hello Special Branch!

Post World War II we find a Britain with its treasuries exhausted after paying for the War; a diminishing world power supported by colonies it could no longer afford to maintain, nor contain! Its citizens were determined not to be short-changed again, as they were after WWI, in a post-WWII settlement they had fought so hard for, after a conflict in which so many had lost their lives.

Money for this reconstruction and social investment could only come from the US, the only global power to emerge unscathed from WWII. What would the rising US Empire demand in return from the diminishing British Empire?

We’ll share peoples’ stories of the push for social reforms, labour activism, civil rights and experience of national service within a diminishing empire under austerity; and look too at the break-up of the colonial Empire and Britain’s treatment of its former subjects.

It’s Not All Talks

So, you’ll know it’s not just going to be talks, discussions and workshops!

Not to be missed – go up to Level 2 to see the Feminist Archive’s Women’s Liberation exhibition.

All the events at M Shed are free with no booking required – all are welcome!

This will be our 4th Festival, which once again is hosted by M Shed, Bristol’s social history museum located on the historic harbourside.

We are also pleased to announce several tie-in events:

The following programme of events will be updated regularly.